Patsy Wilbanks of LaFayette, Georgia, never knew what it meant to be a viral star until she became one herself.

The 77-year-old is a grandmother, baker, and, most recently, internet famous. It all started when she shared a recipe on Facebook. Then, people fell in love with the Southern darling — and wished she was their grandma! 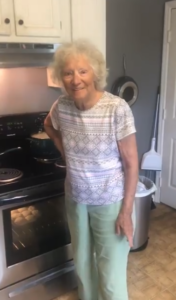 Back in June, Patsy heard a family friend, Andrea Bates, wanted her recipe for homemade biscuits. But instead of simply writing it down, she decided to have her grandson, Chris, record her going through all the steps. Little did she know that thousands would be watching!

After Patsy uploaded the series of videos to Facebook, viewers couldn’t help but reminisce about cooking with their own grandmothers. They adored her sweet personality — and her sense of humor!

“Let’s test them out. Oh, I forgot you can’t eat it, I will!” she says after the biscuits come out of the oven. “I hope that teaches you something about biscuits.”

Patsy was stunned by the response and even more thrilled to hear people were trying out her recipe! What’s more, fans practically demanded she create more videos.

“At first when somebody would make a comment on my Facebook page I would answer it,” she said. “Then it just started going boom boom boom and I couldn’t answer everybody so i just had to put a thank you to everybody. I mean everybody this is such an honor. I can’t believe they would watch my video and make those biscuits.” 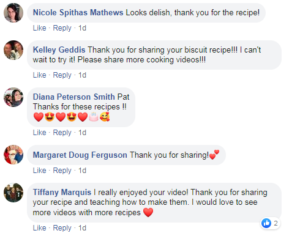 Isn’t she the cutest? We wish she was our grandma, too! What we love most about Patsy, though, is that she’s giving everyone the chance to enjoy baking with a grandmother, whether they have one or not. You can join in, too, by viewing her video recipes for biscuits here and cornbread here.

Check out a portion of Patsy’s latest tutorial below, and share with others who’d love to try her recipes!