Ever since American Idol debuted in 2002, reality singing competitions have been popping up on every major network. In 2017, Fox added a new one to the mix: “The Four” which selects four singers every week who then have to compete to keep their spot in the competition.

Back in July, Noah Barless appeared in an attempt to steal a spot as a finalist.

The Oklahoma native has been singing since he was 5 years old. His dad was a pastor and Noah would perform at church on a regular basis. By age 15, Noah had already released two albums (one of which he co-wrote) and toured the US.

Noah says the artists who inspired him most are James Blake, Tori Kelley, and (of course) Beyonce. Over the years, he’s developed his own sound that he says is a mix of “alternative pop and R&B.”

When he took the stage on “The Four”, Noah performed a ballad version of “The Middle” by Zedd, Maren Morris, and Grey. The original song is (super) poppy with bold vocals. So, Noah’s rendition was both unexpected and beautiful.

Zedd himself even caught the performance, and “approved” of it on Twitter. 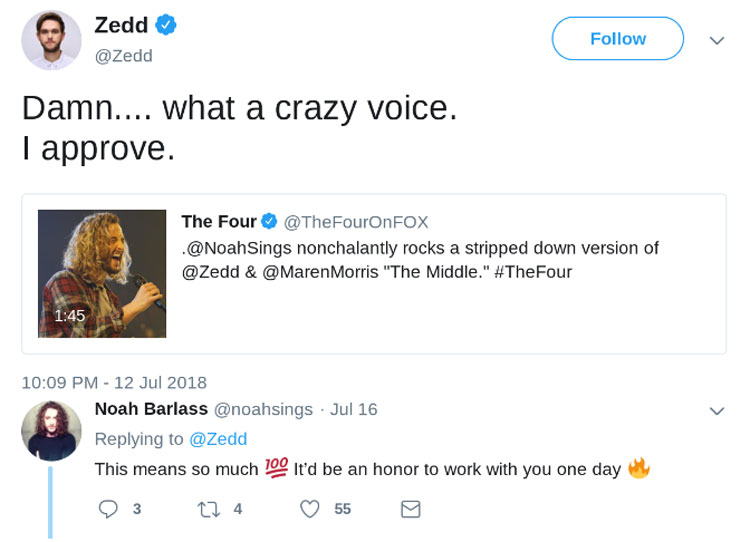 The judges also gave their approval and voted for him to stay on and challenge one of “the four” for a chance to steal a seat… which he did!

Check out the stripped-down cover in the video below – and don’t forget to share with your friends!