No matter your story or situation, there is at least one person in your life who you can’t imagine living without. No matter how you look at it, this life is short… but it is also a beautiful opportunity to love.

Jim Minnini, 58, of Brockville, Ontario, was sent to the hospital earlier this month after his third battle with lung cancer took a turn for the worse. This time around, it was terminal.

The day he was admitted to the ICU of Kingston General Hospital in Kingston, Ontario, his loving wife Cindy had a heart attack. She was rushed to the hospital, but not the same facility as her dying husband.

Their heartbroken sons, Chris & Matthew, was forced to spend time between both hospitals–trying to see each parent as much possible.

But as Jim got word of his wife’s condition, he knew he had to see her.  Unable to talk , he spent hours trying to write a note to the nurses saying he wanted to see his wife.  His son Matthew said, “It looked like the first letter was a little bit of a messed up ‘W’. He was trying to write wife he had circled it.”

Once the hospital staff understood, they acted quickly to bring the husband and wife together.

Dr. Chris Parker of Kingston Hospital, where Cindy was transferred to, said, “It seemed like such a simple thing to do to be able to bring two people together especially when both were very very ill.”  Once Cindy had stabilized, doctors transferred her to Jim’s hospital. She was still under sedation when Jim was moved into her new room.  He silently held her hand as she slept.

By the time Cindy came to, her beloved husband of 24 years had passed away.

Chris took pictures of the inseparable couple together so his mother could have a reminder of their sad, but beautiful last moments. 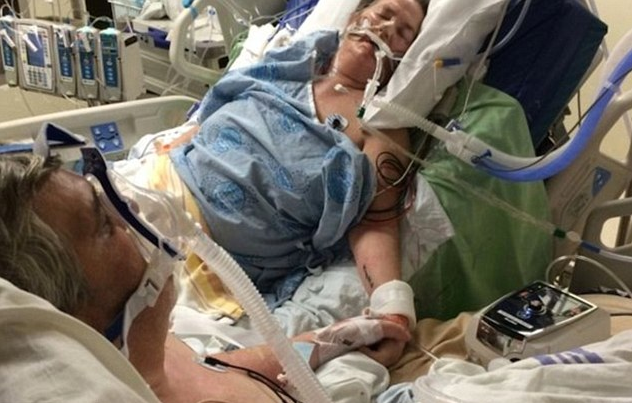 About the moment and his father’s desire, Chris said, “He would have just kept hanging on. He wouldn’t have left if he hadn’t been able to say goodbye to her,” he said. “He wasn’t leaving this world until he said good-bye. That’s what he wanted, that’s all he wanted and as soon as he got that he was peacefully able to go.” 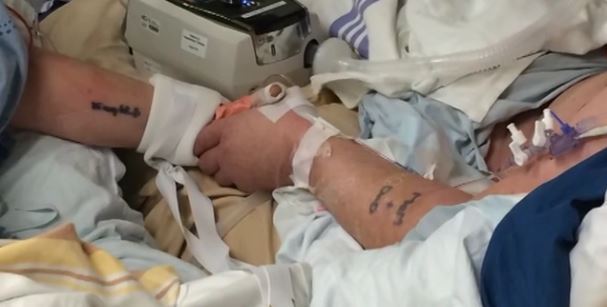 “Seeing them, you knew it was right. You knew it was worth it, you knew that’s what he wanted. It was like all the struggle he went through to try and get to say he wanted to go see my mom to the point where he actually saw her,” Chris said.

Cindy Minnini is now home and recovering, and she said that seeing pictures of her and Jim in his final moments has helped her find peace. As mother and sons try to forge on, it seems that Jim and Cindy’s example of true love will help their family get through the tough times ahead. 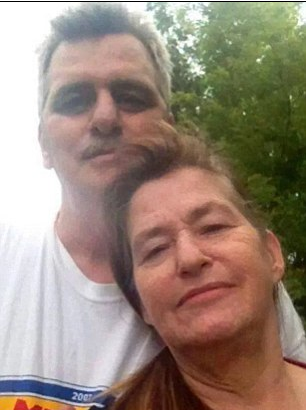 Share this important message today – cherish those you love with every second you can.