High school is always tough, but it’s even harder when you don’t have any clothes to wear.

Many families simply lack the resources to go out and get their kids new clothes because they grow so quickly during those formative years. For teens like Michael Todd, a freshman at MLK College Preparatory High School in Memphis, Tennessee, going to school each day leaves him open to terrible bullying from insensitive kids who simply don’t understand poverty.

Michael says he’s been picked on his “entire life” because of his appearance. For the first three weeks of his freshman year of high school, he was forced to wear the same shirt, pants, and beat-up sneakers every single day. It didn’t take long for the other teens to notice, and before long he was being subjected to torment every hour of the school day.

One day kids were picking on Michael while Kristopher Graham, a popular football player, happened to be nearby. Kristopher found himself laughing along with the bullies who were taunting Michael about his clothes, but after he left class he felt terrible about it.

“When I saw people laugh at him and bully him, I felt like I needed to do something,” Kristopher said. That night he went home and went through his closet in search of something to give him. He also called his friend from the football team, Antwan Garrett, who also decided to donate some new shoes and clothes.

The next day the two teens sought Michael out. “We was in the same third period,” Kristopher explained. “I said, ‘I apologize for laughing at you and I wanna give something to you to make it up.'”

The boys proceeded to give Michael several pairs of pants, shirts, shorts, and shoes as the stunned freshman stared at them in disbelief. Another student captured the moment on video, and it’s quickly going viral. Now people from all over the country are reaching out to see if they too can donate some clothes to Michael. 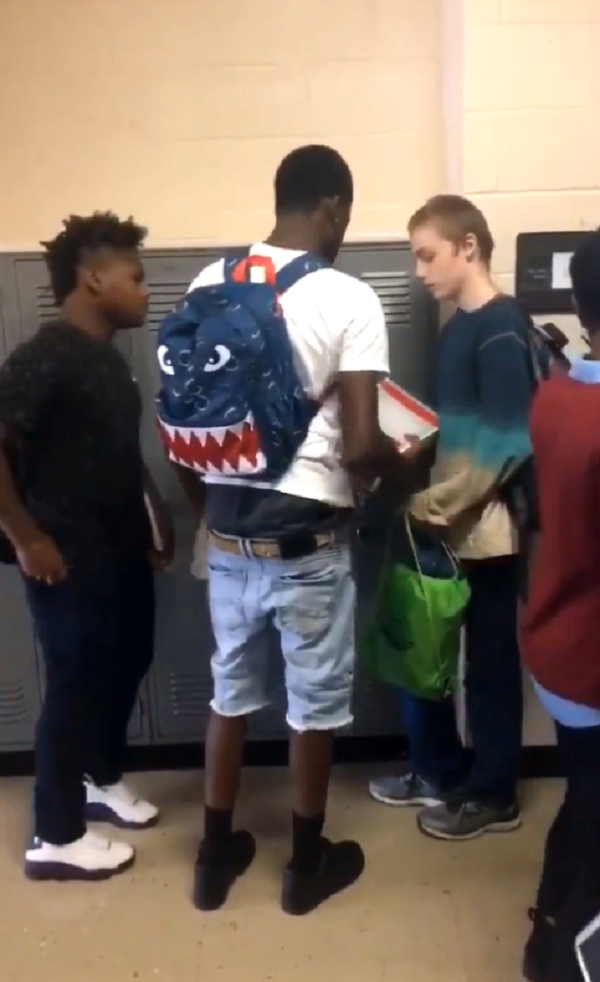 Michael says the sudden act of kindness caught him off guard, and after the shock wore off he felt nothing but gratitude for his new friends. “It was awesome, the best day of my entire life basically,” he said. “I was very happy. I was shocked completely. You guys are awesome.”

Antwan and Kristopher said that helping Michael made them feel so good inside, the deed was its own reward. “It was a weak moment for me, I was crying,” Antwan admitted.

This is the sort of first step we need to see more of in our society. It’s not good enough to sit by and watch someone else suffer; we have to use whatever resources we have to help. Bullying can be stopped in its tracks as simply as reaching out like Kristopher and Antwan did, and the end of bullying will do wonders to make our entire country a kinder place to live.

Watch the emotional scene when Michael gets new clothes below, and be sure to share.