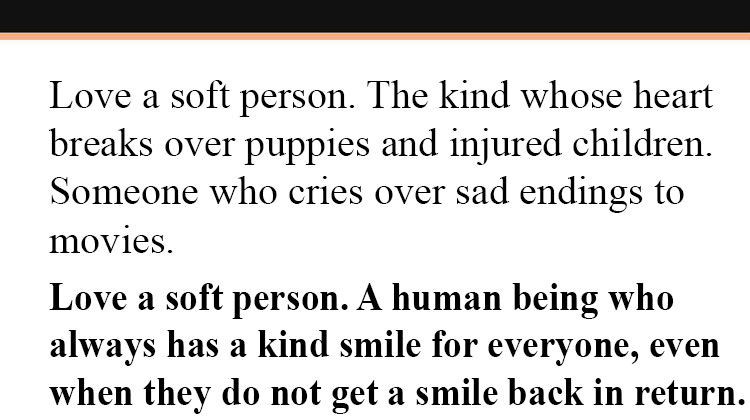 “Love A Soft Person,” The Importance Of Having A Gen...

Do you know someone who is soft? Not soft as in weak, and not soft like these fluffy animals… soft as in soft-hearted. Like this little boy who comforted a sad dog. But it’s not just children who are soft-hearted, we’re all capable of being soft. In a beautiful piece written for Thought Catalog, author and poet Nikita Gill explains what it means to be soft below in an article called “Love a Soft Person.” Check it out:

Love a soft person. The kind whose heart breaks over puppies and injured children. Someone who cries over sad endings to movies and feels deep joy over happy ones. Someone who kisses your soul instead of your heart because they know that your soul is where you keep your universe and your heart is just one star. The sort of person who is told they are over-sensitive because they have a more fragile, easily wounded heart. (Yet soft people will always find a reason to smile, no matter how unhappy things are.)

Love a soft person. A human being who always has a kind smile for everyone, even when they do not get a smile back in return. Someone whose heart breaks over the condition of this world. Someone who always has a gentle word for those who have received the worst news they could in that moment. A man or a woman who cannot look at someone suffering and do nothing to help out. (You see, soft people will never stand for injustice in front of them and let it go when someone is hurting or injured.)

Love a soft person. The ones who are positive, even in the worst of circumstances. Someone whose strength is not in bravado, but in their quiet. Someone who is strong for others because that is what is needed in that moment. Someone who is the moon that soothes instead of the sun that burns. Someone who sees the very best in people even when you think they aren’t worth it. The kind of person who always wants to do the best for those they love. (Because soft people cannot stand the idea of hurting someone that has bestowed upon them their trust.)

Love a soft person. The kind who looks at someone who is struggling, whether it is to open a door, or have lost their keys and will do everything they can to help out. Someone who would rather suffer themselves than let anyone else down. Someone who tries, not because it is what they have to do, but because they want to do the best by you. A human being that is always willing to communicate and talk things through. (The softest people will always ask twice if you are okay, when you say you are, because they can read moods and understand when you need someone who just listens to you.)

Protect a soft person. These kind of people are becoming endangered with words like ‘toughen up’ and ‘you’re so naïve’ and ‘they’re going to take advantage of you’. Someone who you can see is trying despite being broken themselves. Someone who is an easy target for ridicule because their heart is softer than most others around. Someone who is quick to apologize and fix things regardless of blame or fault. (Soft people need protection not because they are weak but because they have been broken brutally by those they have trusted with their hearts.)

Be a soft person. Be a cushion in a world full of rocks and hard places. Be a gentle soul where everyone else is jaded. Be that person. Because people like that are rarer and more precious than the rarest of jewels in this world.