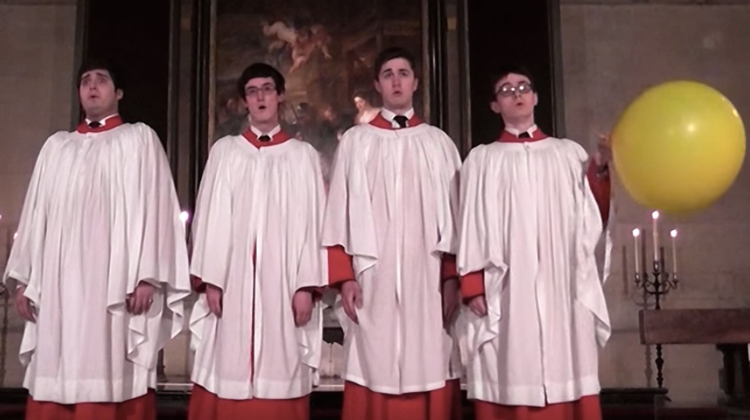 When Boys Choir Lost All Their Sopranos, The Remaining Singe...

The King’s College boy’s choir is world famous for its stunningly beautiful vocal arrangements. Tradition calls for young boys to carry the highest parts of the melody… and the result is truly brilliant. When the youngest of the talent could not perform their parts in the video below, the others were forced to get creative.

In their performance of “Miserere Mei Deus, Gregorio Allegri” four members of the famous choir start their performance with a mesmerizing melody. About halfway though as the tune begins to crescendo, one of the young men in the video pulls a large helium filled balloon from behind his back, breathes it in, and takes his voice to new heights. The unexpected and hilarious moment, took many aback when it first found it’s way to the web. Turns out, it was the most genious April Fool’s Day prank.

“High male voices have been part of the choir sound for more than 500 years,” says Rev. Richard Lloyd Morgan, King’s College Chaplain, in the video below. “After a lengthy consultation process, someone in the chemistry department came up with a simple solution — and now all we need is a very large tank of helium.”

Check out the hilarious moment below!