The word “can’t” doesn’t exist in Jamiyah Robinson’s vocabulary. That’s because she knows — and has proven — she’s capable of anything.

The 10-year-old from Columbia, South Carolina, was born with a rare condition called femoral deficiency, which causes one leg to be shorter than the other. Jamiyah has been using a prosthetic leg since she was five years old. But it has never held her back from her greatest passion: gymnastics. 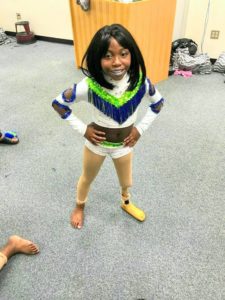 Not only can the fourth-grader nail flips and other difficult moves with ease, but she’s also self-taught! Her mom, LaShawn Jacobs, used to worry that Jamiyah wouldn’t be able to keep up with her sisters. Now she’s constantly amazed by what her daughter can do.

“When she started flipping I was so amazed — it just blew me away,” LaShawn said. “I am very very proud of my daughter. She amazes me everyday and it makes me so happy that she’s inspiring the world.” 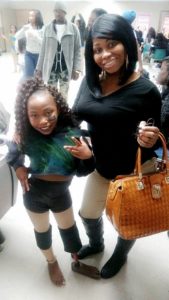 Jamiyah has been competing with the dance team Elite Forces of Destruction for the past three years. She and her teammates are so talented they were even featured on the Lifetime show, “Bring It!” And recently, Jamiyah found her way into the spotlight again after a video featuring her gymnastic moves went viral. 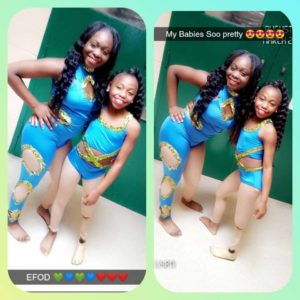 Ever the proud mother, LaShawn couldn’t pass up the opportunity to share her little girl’s talent with the world. So in late March, she uploaded slow-motion footage of Jamiyah demonstrating how she can tumble and flip with her prosthesis. And the response was incredible. 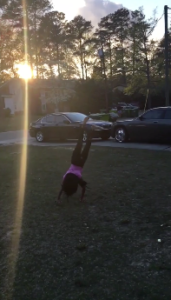 Millions watched and marveled at Jamiyah’s athleticism. Some didn’t even realize she was wearing a prosthetic leg at first. She’s that good. Parents of amputees have also sent LaShawn messages describing how Jamiyah’s videos have made their children feel more empowered. 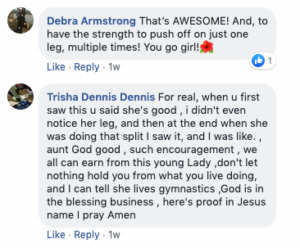 “Jamiyah lets nothing stop her and I want the world to know, like, go for it. Anybody with disabilities, even if you don’t have a disability just go for it and live life fearless like my daughter,” LaShawn said.

If she’s this talented now, just imagine how far she’ll go in the future! This girl will undoubtedly have a very successful career as a gymnast if she chooses to pursue one.

Watch how easily Jamiyah contorts her body in the video below, and don’t forget to share.