The possibility of losing someone we love is one of the hardest realities in life. That’s why it’s so important to tell them how much we care for and appreciate them each day.

Singer-songwriter James Blunt captures this idea beautifully in his heartfelt single, “Monsters.” The emotional music video has brought millions of people to tears and serves as a reminder to treasure every moment. 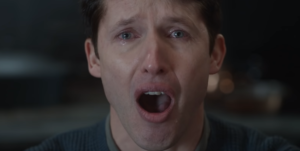 Blunt has spent the last year coming to terms with saying goodbye to his father, Col. Charles Blount, who has stage 4 chronic kidney disease. He needs a transplant, but his son isn’t a match and no other donor has been found yet.

The grief Blunt has been struggling with inspired him to write the moving song and donate all the proceeds to the charities Help for Heroes and the British Legion.

“‘Monsters’ is a eulogy to my father — except he’s still alive and kicking,” Blunt wrote. “But he’s not been well — his kidneys are functioning at just 11 percent. And with that realization, I needed to tell him that, to me, he’s more than just a father. He’s my friend too, and that I love him.” 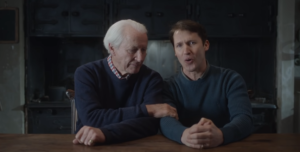 In the music video, it’s clear that he poured his heart and soul into every lyric. As he sings, tear after tear slides down his cheek. We know he’s being entirely authentic because he’s sitting beside his father the entire time.

I’m not your son, you’re not my father / We’re just two grown men saying goodbye … And while you’re sleeping, I’ll try to make you proud / So, Daddy, won’t you just close your eyes? / Don’t be afraid, it’s my turn / To chase the monsters away.

Thank you, Blunt, for bravely sharing your heart with the world. We’re sending all our love to you and your family!

Listen to the powerful ballad in the video below, and share this story to encourage everyone to treasure the people in their lives.