A young woman named Kimberly was enjoying her lunch break, playing Pokemon Go, when she was approached by a homeless man on the street. The older gentleman, named Daniel, had simply noticed her walking about, aimlessly looking at her phone and thought she may need help with directions.

After explaining the game to him and showing him how to catch Pokemon, Daniel had a good laugh. As she turned to leave, the homeless man asked her for some food… what happened next is something we all need to pay attention to.

“While out catching Pokemon in Atlanta I was approached by a frail looking older man on a worn out bicycle, I know I must have appeared lost looking at my phone screen and walking around trying to find a specific Pokemon near me and he asked if I needed help getting anywhere and I told him ‘No, I’m just playing a game called Pokemon Go.’ He went on to ask what a Pokemon Go was and I proceeded to show him and a wild Pidgey showed up and I was even able to show him how to catch it and how it shows up on the camera so it looks like it’s in the real world and he smiled and laughed and chatted with me about how he was wondering what all these young people walking around with their phones doing funny things were doing. 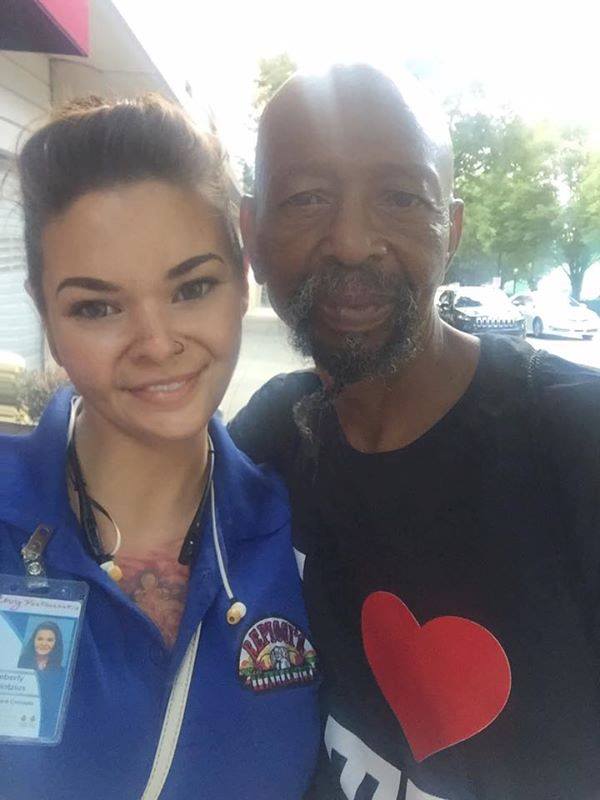 He then thanked me for being so kind and walking and talking with him instead of pretending he doesn’t exist like he had shared with me is what most people do whenever he tries to have conversations with people or tried to offer directions like he did me. for a little bit. Well I was already on my way to grab dinner at the Deli near Centennial Olympic Park and he looked sad all of a sudden and said ‘I dont want you to think I’m trying to beg for money or anything like that like I know a lot of people ask for that and go buy alcohol or cigarettes but I don’t smoke, I’d really just like something to eat ma’am. Is there any way you could help me out? Anything would be appreciated. I’ll even stand right outside wherever you go in because I don’t want you to give me money and never know where it goes to.’

Since I was just going to get myself some pasta salad I went ahead and ordered a whole meal that came with pasta salad as a side and I just kept the side for myself and handed him the rest of food I had ordered for him and with a tear in his eye he asked politely if he could give me a hug and I replied ‘of course! I would love to give you a hug sir, may I get a photo with you in return?’ He smiled and gave me a hug and we took a photo. As I turned to walk back to the park where my dad was at work in the Repicci’s trailer he said ‘Miss Kimberly (I still had on my work name badge) my name is Daniel Wise, I am a Vietnam Veteren and from the bottom of my heart I would like to thank you for the kindness you showed me today and letting me see that there are still young people like you out there who do selfless things like this in a world that often turns its back on old men like me and pretends we don’t exist.’

While it broke my heart to know he is more than often ignored and treated like he isn’t even human, it warmed my heart to help him get a meal in his belly tonight and lift his spirits with a simple conversation while walking down the street.” ❤️

You never know when you’ll have the chance to do something beautiful for somebody else. This lone veteran had been ignored and pushed to the side, but a moment of human kindness from a stranger restored his faith in humanity.

Sign up for our free daily email.
Stay inspired 6 days a week with InspireMore's Morning Smile,
the #1 good news email read by 500K+ people.
Thank you for signing up to Morning Smile!
Next Story