As the owner of a German shepherd myself, I speak with authority when I say nothing is cuter than seeing one do an expressive head-tilt.

Dogs often tilt their heads when they’re confused or trying to figure out where a sound’s coming from, but German shepherds are so smart that stumping them gets harder by the minute. You really only get one shot at it, so the best way is to introduce them to a completely new sound. Hearing a child cry is apparently old hat for Gotham’s brother, but when he hears the noise, his satellite dishes of ears stand at attention: 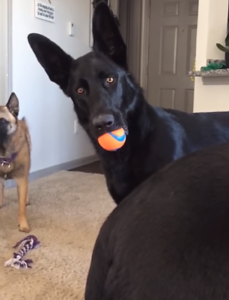 He stops in his tracks and stares intently at his mom’s computer, concern and empathy nearly oozing out of his eyes. You can just see the wheels turning: “That sound? Kitten? Sound like kitten. Where kitten smell?”

He stands there for several seconds, but when another plaintive cry joins in, he jumps into high alert! Gotham knows someone’s in distress and his reaction is so overwhelming he drops his ball.

After the toy drops to the floor, he means business and brings it in for a closer look… while revealing that he had a second ball in his mouth! Relinquishing control of ball #2 can only mean one thing for Gotham: Someone needs saving! 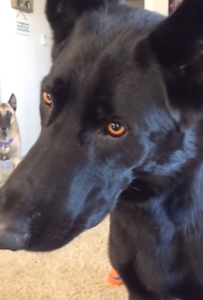 After his mom giggles because of his intense interest in the video she’s watching, Gotham figures that the situation isn’t quite so dire and he backs off.

But the cries grow more intense and his attention is once again focused on the sad sound. 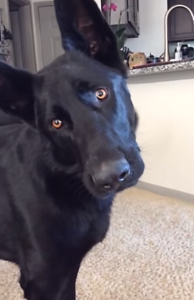 Watch Gotham’s concern grow and grow in the video below, and share to spread laughs!