The day Geoffrey Walker of Leicestershire, England, joined Instagram was a blessing to the world.

The 86-year-old figured the platform would be a great way to keep in touch with family members who’d moved away. Little did he know that it would also catapult him and his wife Pauline into Internet stardom! 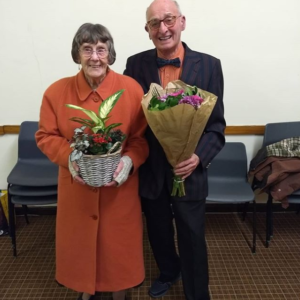 Geoffrey and Pauline have been married for nearly 69 years and describe themselves as “an old English couple living the best life together in footsteps of faith.”

They have three children, five grandchildren, and 11 great-grandchildren, many of whom were featured in the early days of Geoffrey’s account. While they still occasionally appear in his feed, Geoffrey has since shifted his social media focus to one person: his wife.

His adoration for her is obvious. “Pauline as stunning today as she was at sixteen,” one caption reads. 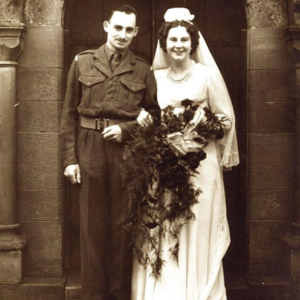 But these heartwarming posts were hidden gems until one of his followers, Lauren Skell, tweeted about the couple in 2017. That’s when the Walkers went viral and gained a surplus of new admirers overnight! 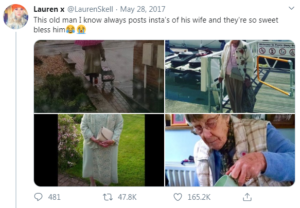 At first, Geoffrey didn’t understand what all the fuss was about. Even after his granddaughter explained it to him, he told Metro, “I don’t know about Internet sensations — all will blow over in a couple days.”

It’s been several years, and their online fame still hasn’t blown over. Geoffrey and Pauline, who are now 89 and 86 years old, are more popular than ever! People just can’t get enough of their adorable videos.

It's a beautiful sunny morning just having a cuppa. Love to everyone. #ilovethatgirl

Whether they’re sharing gardening tips, Pauline’s craft projects, or peeks into their everyday life, there’s always a common theme: love. In fact, most of Geoffrey’s posts include the hashtag #ilovethatgirl.

Pauline picking a few flowers for the Sunday lunch table just the two of us today. Love to everyone hope you all have a good day. #ilovethatgirl

Had a lovely afternoon at Staunton Harold Pauline went to the fabric shop I purchased a new pump for the fish pond. It was £110 only just had enough left for 2 chocolate chip ice creams. I love that girl ❤️

Could their relationship be any sweeter? Here’s to a lifetime of love between two of the cutest people we’ve ever seen. You can keep up with the Walkers here.

Learn more about this darling couple in the video below, and share their relationship with the world.