First responders, nurses, doctors, and later, rehabilitation specialists, are all instrumental in getting a patient back on his or her feet after a serious injury. But no one can deny that having the support of family and friends along the way is also extremely critical.

Last month, Tara Monday and her two children Leila and Rush were in a head-on collision in Greensboro, North Carolina, when another driver swerved into their lane. Tara and Leila were admitted and discharged from the hospital in short order, but the impact left 7-year-old Rush with internal injuries that required surgery. 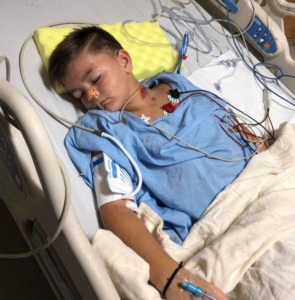 When his best friend, 8-year-old Quinton, learned about the accident, he was inconsolable and broke down in tears, his mom Shamicka Neal recalls. But she told him he needed to be strong and pull himself together before they went to visit him in the hospital, and “he was like, ‘Okay, Mommy, I’m gonna be strong so Rush can be strong.”

It’s disorienting to get up after just one day of bedrest, but Rush had been bedridden for days. And he didn’t have much motivation to get up or even try walking… until his best friend came through the doors. Someone snapped a photo of the two of them walking arm in arm along a hospital corridor, and this poignant image of steadfast friendship is melting hearts everywhere! 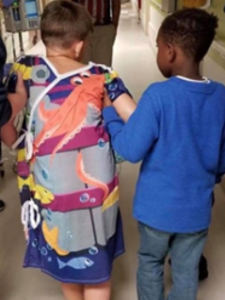 So those were his “baby steps,” and just a few days later, he was the guest of honor at a party to celebrate his recovery, with Rush and Quinton standing side by side, surrounded by about a dozen family and friends. 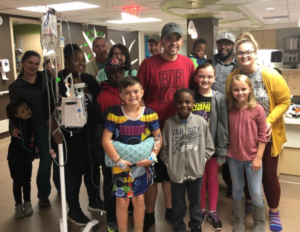 Of course, Quinton did more than just help his friend get onto his feet; he got his spirits back up, too, with some friendly competition! 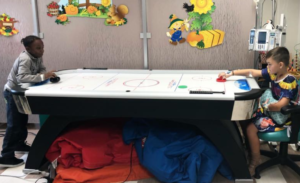 Rush is now recovering back home and he’s set to return to school today. Soon this will be nothing but a memory, but the photo taken that day of Quinton helping Rush with his first steps will live in family lore forever.

As Tara wrote on Facebook, “This world is a better place because of their love for one another.” 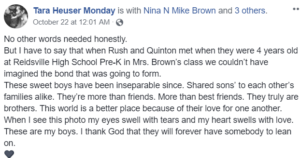 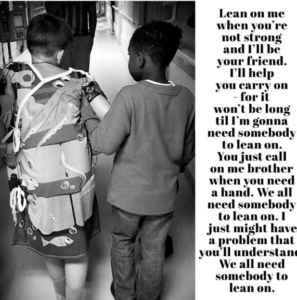 One day, these precious boys are going to look back at this photograph and be reminded they’ve had each other’s backs their entire lives. Share with the family and friends who you know you can count on in your time of need.