Beluga whales are very smart and social animals. They’re often spotted swimming alongside boats, curious about the humans on board.

These creatures also play with objects they find in the water, including plants, wood, and, apparently, rugby balls! As a group of boaters discovered while traveling on the ocean, dogs aren’t the only critters who love a good game of fetch. 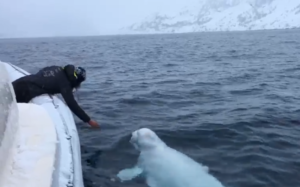 In a video posted to Facebook by Alon Kowen, a friendly beluga whale can be seen approaching a boat with a ball in its mouth. Alon believed the boaters to be South African rugby fans, while other sources state they are researchers.

One of the boaters grabs the ball from the whale’s mouth, then throws it back into the ocean. And just like man’s best friend, the whale chases after it… 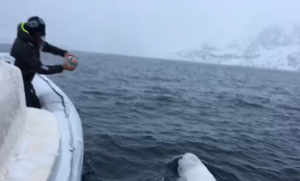 …and retrieves the ball before swimming back for a few more rounds! 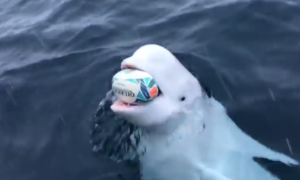 One thing’s for sure — the antics of this aquatic cutie are adorable. What an amazing experience for everyone on board. If we were them, we wouldn’t want to leave!

Watch as the whale plays fetch with its new buddies in the video below, and be sure to share with your own friends!