Forty six years ago, Roberto Gonzales received an injury that changed his life forever. He was serving the United States in Vietnam when he became disabled from an accident.

His disability weakened his condition, he doesn’t have much time left. He recently visited the hospital for a back wound where he learned issues in his liver had formed. More specifically, his kidneys were starting to shut down. But before his life ended, his dying wish was to spend a little more time with his two best friends: his horses.

Ringo and Sugar were Roberto’s two horses. He had a true passion for horses.

In fact, he is one of the few registered horse trainers in Texas who is disabled.

So during his final moments, he was able to be wheeled outside for some fresh air.. and more important to see Ringo and Sugar. 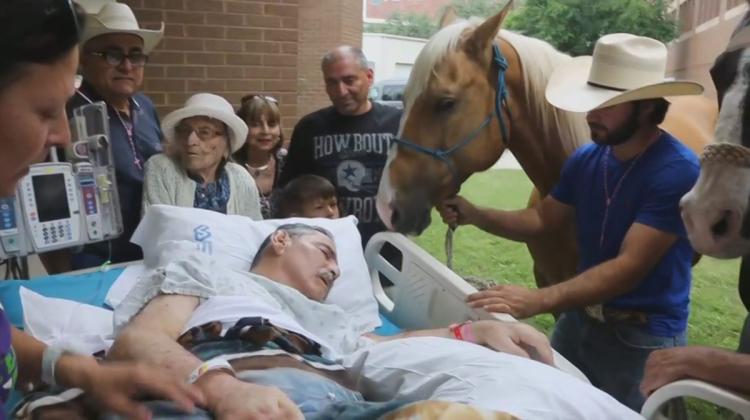 They waited outside as their owner came to find comfort outside a Texas VA hospital. Strangely enough, their meeting was in the same day, May 21st, that Gonzales had actually gotten his injury.

Everything about this reunion was so touching. “When the horses came up to him, he actually opened his eyes,” Rosario Gonzales said. “They came up to him and I think they were actually kissing him.”

What a beautiful moment for a man who fought so bravely for our country. See his final wish fulfilled in the video below.