Barbara Danner has gone to Dutch Bros. in Vancouver, Washington, countless times for her coffee fix, but she’ll never forget the touching scene she witnessed there four years ago.

In 2016, Barbara was waiting in line at the drive-thru when she noticed three employees leaning out of the window, all clutching their customer’s hand. After snapping a photo, she learned the heartbreaking yet moving story behind the intimate gesture. 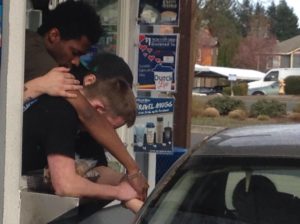 The woman in the car ahead was Alisha Wisbey, another regular customer. She was in tears, breaking down when one of the baristas asked her how her husband, Adam, was doing. But what they didn’t know was that he’d passed away a day earlier from heart disease.

When Pierce Dunn and Evan Freeman saw how distraught she was, they acted on instinct. Another employee joined them as they grabbed her hand, bowed their heads, and said a prayer.

“Her husband passed and as soon as she said that, I’m like, ‘there’s nothing more you need to say, we got this,'” Evan said. “We’re going to do what we do every time there’s someone in pain or hurt. We’re going to give them our love.” 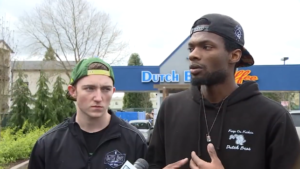 News of their compassionate act when viral when Barbara shared her picture on Facebook, writing, “they stopped everything and prayed with her for several minutes, invited her to come back for prayer and support, as well as anything else that she might need.”

The photo eventually got around to Alisha, who says it made her cry all over again — but happy tears this time. Not only will it always remind her of the kindness she was shown, but it honors her beloved husband.

“Something spiritual or something beautiful like that, you can’t always see it, at that moment,” Alisha said. “But I can now because I have [a] picture, and it’s another way I can remember him.”

While Alisha will never stop missing Adam, knowing she isn’t alone with her pain must be incredibly comforting. Even now, years later, we’re sure she still remembers the young men who dropped everything to console her during her time of need.

Learn more about the beautiful gesture in the video below, and share to inspire more kind acts.