None of the passengers sharing a plane with Dustin and Caren Moore knew them personally. But that didn’t hold them back from celebrating the couple’s greatest joy.

Back in November, the Moores finally fulfilled their dream of becoming parents when they adopted a newborn baby girl in Colorado. Bringing their daughter home marked the end of a long, emotional journey. Then, the strangers sitting around them made the occasion even more special. 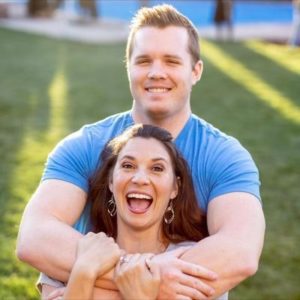 In February, Dustin decided to spread some good on the internet by recounting the Southwest Airlines flight to California. Their daughter got fussy about midway through. She needed a new diaper. So, a helpful flight attendant named Jenny found them a private spot where they could change her. She and another passenger remarked how beautiful the baby was. And both congratulated Dustin after he briefly recounted their adoption story.

Ten minutes later, Dustin and Caren had the same interaction with Bobby, another flight attendant.

“My wife and I exchanged curious looks, but thought nothing more about it,” he wrote. But everything made sense when Bobby made a special announcement introducing their daughter. He told the passengers she’d just been adopted, to which they all cheered. 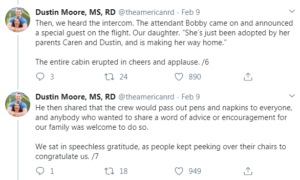 The flight quickly turned into a baby shower as the crew handed out pens and napkins. They even gave the baby her own set of pilot wings! Passengers wrote sweet messages and advice for the first-time parents, which were read over the intercom. Dustin’s mother later placed them into a scrapbook so they could always remember the strangers’ kind words.

One of the most touching reads, “I was adopted 64 years ago. Thank you for giving this child a loving family to be part of. Us adopted kids need a little extra love. Congratulations.” 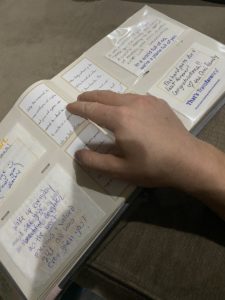 As it turns out, the same happened to Bobby and Jenny, who are married. They told the Moores this was their way of repaying another flight attendant’s gesture on the way to their honeymoon. 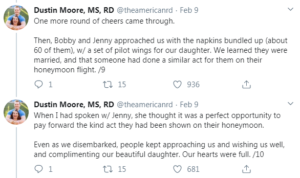 But even they couldn’t know how much this meant to Dustin and Caren. The couple had spent nine years trying to have a baby, during which Caren suffered multiple miscarriages.

“The outpouring of love from that flight, brought on by the actions of two thoughtfully observant flight attendants… it exceeds my ability to describe what it meant to us,” Dustin wrote. “How much those wings and written notes uplifted two new parents determined to love their new daughter.”

Congratulations, Dustin and Caren! We’re so happy you finally have your baby girl. Thank you for sharing your beautiful story.