If she’d really wanted to, Goldie the Shih Tzu could’ve easily climbed out of the ravine she was in and sat in the parking lot until someone noticed her and took her home, or at least brought her some food and water.

But she didn’t… and it’s for the sweetest reason ever.

On a spring day in 2013, Animal Control Officer Michelle Smith was called to a neighborhood near the Home Depot in Anderson, South Carolina. She heard howling coming from a nearby ravine and followed the sounds to their source, thinking it was probably the dog someone had called about. 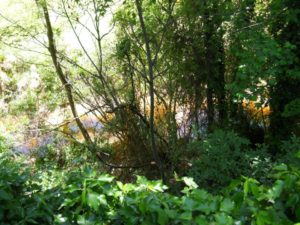 And it was! She was hidden in the foliage, but when Officer Smith got a closer look, she was shocked to discover the pup wasn’t alone. And she was actually kind of busy at the moment… busy nursing a kitten! The tiny ball of fluff couldn’t have been more than a few weeks old.

This sweet dog’s instinct to take care of the helpless little creature was so strong that her body began producing milk, even though she didn’t have any puppies of her own! 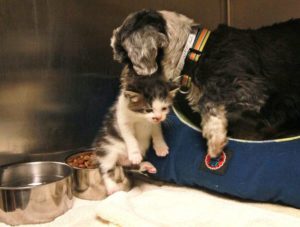 Officer Smith gathered up the adorable pair and brought them to the local animal shelter. There, the staff named them Goldie and Kate, after Goldie Hawn and Kate Hudson, the celebrity mother-daughter duo. Goldie wasn’t producing enough milk to satisfy Kate’s voracious appetite, so workers switched her over to a bottle and took over the feeding schedule from there.

As Goldie and Kate settled into their temporary home, word about this adorable pair started to spread, and the shelter was soon inundated with adoption applications from as far away as California and England. 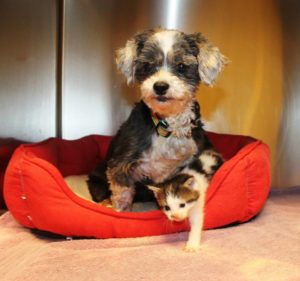 But in the end, Goldie and Kate didn’t venture very far. They were adopted by a local man, Joe Harris, and his wife, who wrote in their application that Goldie and Kate reminded them of their former dog and cat, another strongly bonded pair who’d died within months of each other just the previous year.

The couple even set up a Facebook page so their fans can keep tabs on them. The latest photo, posted in January, shows Goldie “prancing thru the snow.” Not surprisingly, her feline sidekick was nowhere to be seen, probably doing something more catlike and sensible. 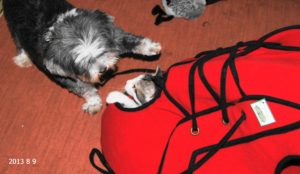 Way to go, Goldie! It’s amazing to think her body had an actual, physical response when she realized this little kitty needed her.

Watch the video to hear more about their story, and remember to share to spread more love.