Hundreds gathered near the epicenter of the 7.1 earthquake that struck Mexico’s capital city on Tuesday, watching as rescuers worked to pull survivors from the rubble of buildings had collapsed around them.

In a moment of happiness and sheer relief, the crowd – gathered in the Alvaro Obregon area of Mexico City – burst into near-deafening whistles and cheers as half a dozen men pulled an unharmed yet visibly dazed dog from a pile of concrete debris. 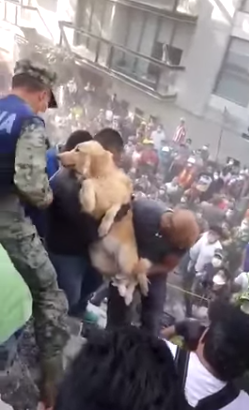 The Golden retriever, docile and panting lightly, leaned back into the arms of the man who held him tightly, clearly understanding that he and the others were there to help.

The heroes’ hands swarmed around his body and face, reaching out to ruffle the fur on top of his head and lightly stroke his muzzle, gentle touches as though to reassure themselves that he indeed was unharmed. 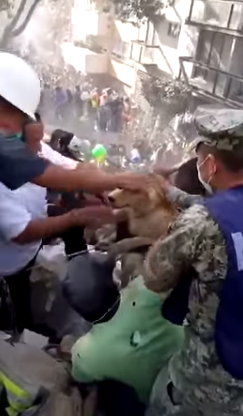 At least 225 people were killed in the quake, and search and recovery efforts are continuing among the dozens of structures that crumbled throughout the central part of the country. The fact that this sweet Golden was found alive among the ruins gives hope that many more humans and animals are still out there, just waiting for their rescuers to arrive.

Watch the video below, and share to spread hope and love!