You know that goal you’ve always wanted to achieve that seems too far out of reach? What would you do if you finally made such an accomplishment?

One dog just crossed a milestone he apparently never thought he’d come close to. Max lives in Jackson, Mississippi, with his owner, Abbie, who caught the pup’s hilarious reaction to fulfilling his dream… of catching his tail. 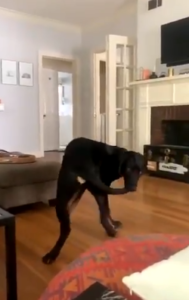 During a recent power outage in her city, Abbie hung around at home, amusing herself by watching and recording Max chasing his tail on her phone. As is the dog way, Max spun around again and again, snapping at that elusive furry prize. 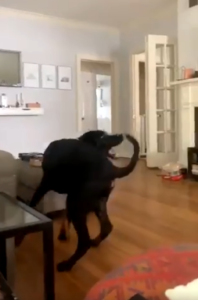 Then, by some incredible fluke, Max actually caught his tail. Abbie giggled and congratulated him, exclaiming, “You got it!” Stunned, Max just froze up and looked at his mom, wearing a wide-eyed “deer in the headlights” expression. 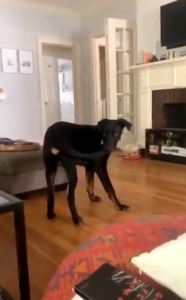 It only made Abbie laugh more, and Max? Well, he just kept staring. And staring. His eyes seemed to be asking, “what now?” He’d obviously never thought this far ahead. Then, tail still in his mouth, Max walked himself out of the room as if to say, “I’ll show myself out.” 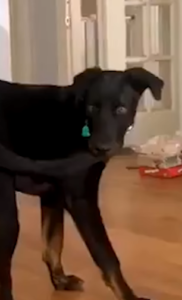 With Abbie’s permission, her friend Harrison Parker shared the footage on Twitter with the caption, “My friend’s dog, Max, finally caught its tail, and then didn’t know what to do with itself anymore.”

Millions watched Max’s antics and could not stop laughing.  Some cracked jokes and even shared videos of their own dogs’ reactions to catching their tails. 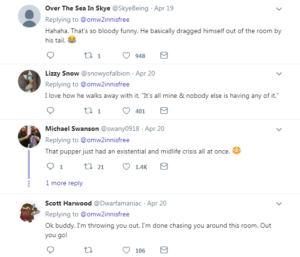 Max may not be the only dog to make such a lifetime achievement, but he’s certainly making us smile!

Check out the hilarious moment in the video below, and share this story with all your dog-loving friends.