Few children enjoy getting vaccinated or having their blood drawn. In fact, many carry the fear of needles into adulthood.

Unfortunately for Gracey Wemyss of Inverness, Scotland, needles are a regular necessity. The 10-month-old has spent much of her life in the hospital, as she was born with multiple complications. She’s already had open-heart and kidney surgery. She also has Down syndrome. 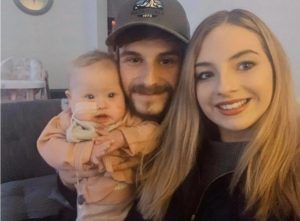 As such, Gracey’s had her blood drawn many times. But the poor girl has never gotten used to the frightening sensation.

“She is terrified of getting blood done and it’s an incredibly traumatic time for her and for us watching her in such pain. She has had blood done a huge amount of times already and she is always distraught,” her mom Shannon told Storyful. 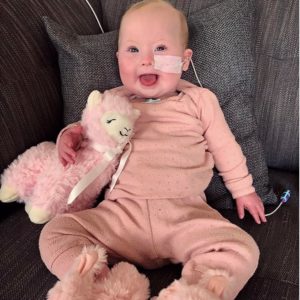 “Nothing can calm her or soothe her, as she is too young to have numbing cream,” Shannon added. Then, she says, “We met Ryan.”

Gracey had a completely different experience during her most recent blood test at Raigmore Hospital in November. And it’s because of Dr. Ryan Coetzee — and his beautiful voice. Ryan is a pediatrician as well as a trained classical singer. 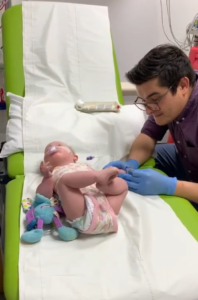 When Ryan started working at the hospital in August, he used his vocal talent to distract patients, earning him the nickname “singing doctor.” During Gracey’s blood test, he crooned Nat King Cole’s “Unforgettable.” And his effect on the baby was instantaneous. Shannon recorded as Gracey watched, mesmerized. She didn’t cry or scream at all, just kept her eyes on Ryan.

After already witnessing her daughter endure a lifetime’s worth of pain, Shannon couldn’t be more grateful. 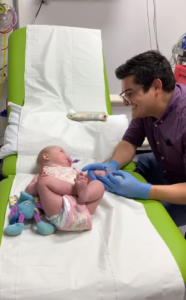 “I have never met a doctor quite like this one, absolutely amazing. He had a smile on everyone’s face. An example of a job being more than a paycheck at the end of the month. He has made our day,” she wrote.

To that, Ryan says it isn’t a big deal — it’s something he does for all his patients. But he’s definitely happy to be making such a difference. Clearly, this is a man who loves what he does: helping other people.

Watch as Ryan soothes his tiny patient in the video below, and share to make others smile.

This is something so special! My daughter is usually distraught getting bloods done, she has had them done a huge amount of times but never has had a reaction quite like this, not one tear. I have never met a doctor quite like this one, absolutely amazing. He had a smile on everyone’s face. An example of a job being more than a pay check at the end of the month. He has made our day ?