A lot of the time when people decide to adopt a dog, they head to the nearest shelter, walk through the kennels, and see if any pups really stick out.

Sometimes people melt when they see a shy dog huddled in the corner or when a boisterous puppy stumbles over for a kiss. It’s about finding a four-legged friend who just clicks, one you feel drawn to even if you can’t explain why. But one Australian man named Drew, who decided to rescue, can explain exactly why he was drawn to his doggo of choice, and the reason is truly hilarious. 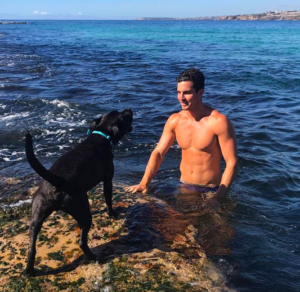 When Drew wandered through the kennels one day, he was excited about the prospect of finding the perfect dog for him and being the perfect human for that pup. He browsed and browsed until he heard something a little odd. It was Dennis, a 9-year-old pit bull mix who sounded more like a seal than a dog!

He was actually planning on adopting a different dog, but Dennis wormed his way into Drew’s heart immediately.

“I was like, ‘What is this dog? I’ve got to take him out,'” Drew said of their initial meeting. Sadly, however, Dennis had already been signed for. Drew couldn’t let him go that easily, though, so he offered to foster him for two weeks until his family could take him home.

Happy World Oceans Day! I’m still learning how to swim in the big old thing – but I bloody love it!!! 🌊😃

“It was a terrible idea,” Drew said, looking back.

He knew he’d fall in love with Dennis but he just couldn’t stand the thought of him being caged a second more. When their two weeks were up, Drew was completely heartbroken. That’s when he decided to throw out a Hail Mary to see if the shelter could convince the new family to let Dennis stay with him. 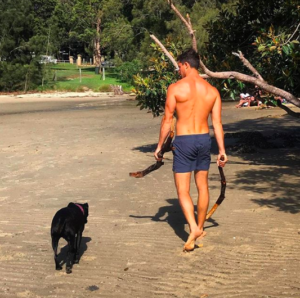 Thanks to precious videos and photos Drew had shared online, the would-be family saw just how happy Dennis was with his foster dad. They were so taken aback by their bond that they eventually let Drew keep him!

“He sounds more like a seal and a pig who somehow ended up as a dog,” Drew jokes. For some reason, the adorable pup just can’t seem to get a handle on normal dog sounds, which is made even funnier by the fact that he is the ultimate chatterbox.

Never afraid to speak his mind, Dennis loves squealing his heart out while begging for snacks from Dad or playing with his dog friends. His adorable vocabulary freaked his dad out at first, but then he realized that Dennis was just trying to communicate. He had his own language!

I never know why they make me wait when its clearly my turn. I’ve been waiting since the food showed up. Isn’t that long enough? 🙄🍗🤤#justfeedmealready #starving #haventeateninlike2minutes

These days, the two of them are totally inseparable. “Before I had him… I don’t think I knew how to love properly,” Drew explained. “He taught me what real love and friendship actually means.”

Since coming into Drew’s life, Dennis has totally changed the way the man sees the world. 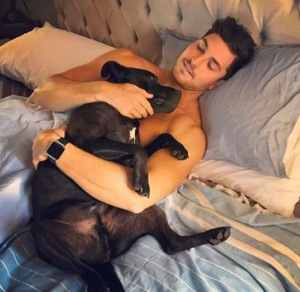 If you can’t get enough of this precious duo, be sure to follow Dennis over on Instagram and share this heartwarming adoption story with your friends!