Brandon Thomas, who is known as the rapper B-doe, can churn out clever rhymes at the drop of a hat. But even his talent is no match for the purest sound in the world!

Few people can resist grinning when they hear a baby laugh, including Brandon, whose son Quentin finds him hilarious. Last year, the California dad challenged his then 5-month-old to a rap battle — and promptly lost in the cutest way possible! 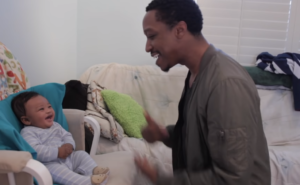 In a video, we see Brandon start out strong with funny observations every new parent can relate to. “You poop without warning,” he reminds his beaming little one.

After a few more lines, Quentin begins to giggle nonstop, and the awesome dad completely loses his composure. Who could blame him? Quentin is cute enough to melt anyone’s heart! 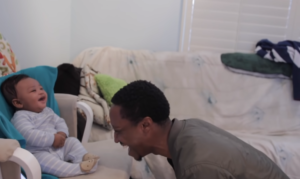 Despite not uttering a single word, Quentin is the clear winner of this contest. After all, we could listen to him all day!

Try not to giggle as you watch the adorable father-son moment in the video below, and share this story to spread the joy.