Cynthia Kudji and her daughter, Jasmine Kudji, are healers at heart.

Both shared the same dream of becoming doctors, though for Cynthia, motherhood came first. But today, the pair stand as history-makers for accomplishing those dreams together. 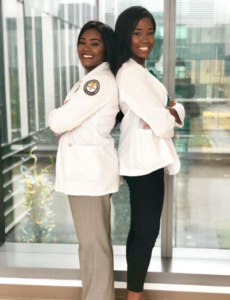 Cynthia, a Ghana native, planned to become a doctor early on, but chose to wait when she got pregnant with Jasmine at 23 years old. That said, she still built a career in the medical field, working as a nurse and nurse practitioner for nearly 10 years. And she never stopped imagining the day she’d be referred to as Dr. Kudji. 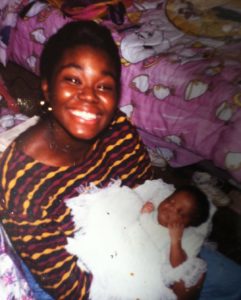 But embarking on the path toward her dream career meant making a difficult choice — to be away from her beloved daughter. Jasmine attended LSU School of Medicine in Louisiana, while Cynthia studied at the University of Medicine and Health Sciences in St. Kitts, finishing her degree at the Maine campus.

“I think initially it was difficult because my mom and I have always been really close so I had to get used to the distance, we had to learn how to FaceTime and Skype each other, so we were Skyping each other every day and whenever I had struggles and she had struggles, we just had to learn to communicate from a distance,” Jasmine told UMHS. “But I think over time we figured it out.” 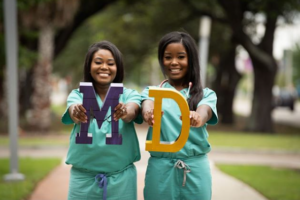 Their sacrifices paid off in April when the two graduated from medical school at the same time! Cynthia earned her M.D. in Family Medicine and Jasmine earned hers in General Surgery. But the best was yet to come.

On Match Day, during which medical school graduates get the results of their residency and fellowship applications, the Kudjis learned they’d both be going to LSU Health! After spending years apart, they’ll be working together. They’re the first mother-daughter duo to graduate from medical school together and match at the same hospital. 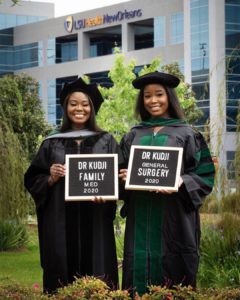 Congratulations, Dr. Cynthia Kudji and Dr. Jasmine Kudji! You’ve both worked so hard to get to this point. We know it wasn’t easy, but you inspired each other to succeed.