The more mainstream certain types of dance become, the easier it becomes to forget that every genre has a rich history.

Take breakdancing, for example. While in the grand scheme of things it’s a pretty new genre, this athletic form of dance really took hold in the 1970s and it was brought to life by young black and hispanic men living in the Bronx. After a while, it became an indelible part of hip-hop culture that spread like wildfire around the world after going mainstream in the United States.

There’s really nothing quite like watching b-boys pull off these incredible moves, which is probably why one Carnival Cruise ship turned it into entertainment for its guests. During one show, however, everyone got a huge surprise. 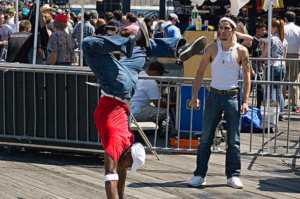 Members of a breakdancing crew hired by Carnival were putting on a show for passengers back in 2014. First, they showed off their own amazing moves, wowing every guest in the audience with their strength. Every incredible turn of their routine drew gasps and applause from spectators, but instead of just having them watch, the dancers came up with a better idea. 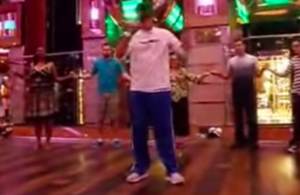 They decided to get everyone in on the fun! Midway through, they pulled spectators from the audience onto the dance floor to try their hand at some basic b-boy moves, like the wave, downrock, and toprock. Once people started getting a hang of the basics, they upped the ante. 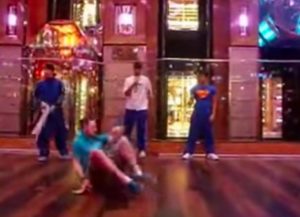 Calling for volunteers, they wanted to see if any brave souls would try to put on their own little routines in the middle of the floor. The first volunteer’s routine went as expected. It was a little clumsy, but you try doing that! It’s super hard. Needless to say, the last thing the dancers expected was to be totally schooled by a veteran b-boy from another era. 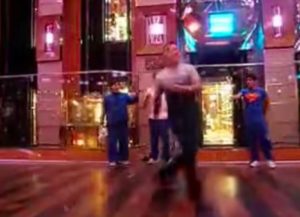 But that’s precisely what happened! The unassuming man stepped out onto the floor, hyping up the crowd in true b-boy fashion. That’s when he really started to show off his skills and everyone lost their minds!

Watch him teach a few young bucks that he’s still got it in the video down below and share this if you were blown away by his skills.