True artists have more than talent. They feel their work on such a deep level that they help their audience experience similar emotions.

At just 16 years old, Allegra Miles of the Virgin Islands is already proving herself to be worthy of the title! Moments into her blind audition on “The Voice,” she transformed from a fan into a sought-after star. 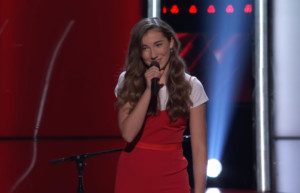 In a video of her performance, we quickly discover that her voice is mature beyond her years. At first, she ventures gently into a stripped-down version of Kings of Leon’s “Use Somebody.”

As she gets further along, she belts out the lyrics, packing so much confidence and emotion into her performance that she leaves the audience cheering wildly. 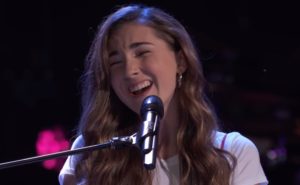 Kelly Clarkson says the teen reminds her of season 14 winner Brynn Cartelli before she turns her chair around. Nick Jonas quickly follows suit with a shocked, “Wow!” when he sees how young the musician is.

“I could tell you were really into the message,” Clarkson adds afterward. “That’s so telling of your character and what you’re going to be like as an artist.” 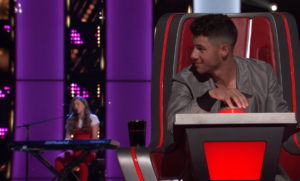 Since Clarkson and Jonas are the only ones who turned their chairs around, they eagerly try to convince the teen to join their coaching team. Clarkson even sweetens the deal by promising her a “Team Kelly” jacket. Not to be outdone, Jonas makes an even better offer: He’ll hand over his own jacket!

Allegra ultimately chooses Jonas, so we’re certain her best is yet to come! 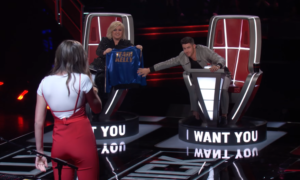 With this much talent and passion, we’re sure Allegra will go far in the competition. We wish her the best of luck!

Listen to her beautiful performance in the video below, and share her powerful voice with the world.