So much for an easy target.

Aaron Jacobs was on duty that night behind the register at the BP station in Lenexa, Kentucky ringing up purchases and greeting people as they entered. The two men who entered with the intent to rob it, couldn’t have picked a worse employee to pick a fight with if they’d tried. 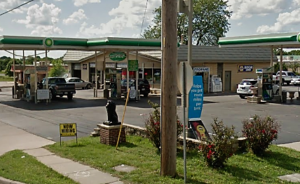 Aaron was only vaguely aware that one of the men had circled around the counter, and “didn’t actually really notice until I kind of turned around and he was standing right behind me,” he recalled. “And that’s when I saw a 12-inch blade coming my way.” 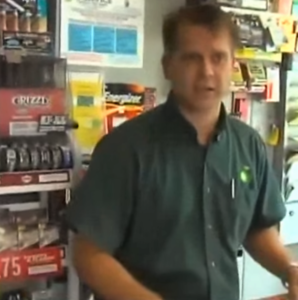 And here we’ll pause to let you in on a little secret: Aaron is a former Marine combat instructor and has a black belt in karate. With more than two decades’ worth of martial arts, self defense, and other training under his belt, he’s really not someone you want to mess with.

Of course, these men didn’t know that when they targeted the store. But the man holding the knife had to have known he made a big mistake the moment Aaron laid eyes on it.

“When you train in martial arts you train your body to react,” he said.

And react he did, swiftly and decisively. He easily wrested the knife out of the man’s hand, then rammed him face-first into a nearby display rack. First and foremost, Aaron was concerned about the safety of the other customers in the store. But he was so confident in his ability to overpower the man that he worried more about the spilled merchandise than his own safety!

“The cigar rack got knocked over, which, I was worried about that during the time,” he said with a chuckle. “And then the chips rack exploded and I’m thinking, ‘Oh no, not the chips rack.’” 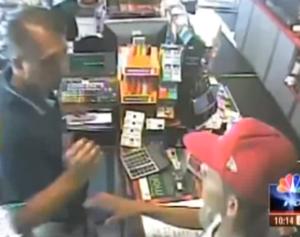 Once the men realized what they were up against, they decided not to push it and fled out the door. Aaron hit the alarm and took off after them, but unfortunately, wasn’t able to catch up. Still, he managed to keep everyone nearby safe, thanks to his specialized training.

These guys definitely messed with the wrong Marine. Listen to him discuss the incident in the clip below, and share his heroism today.

When her daughter started to talk, Neffiteria Acker of Atlanta, Georgia, taught her to look into a mirror and say something positive about herself. These daily affirmations became a wonderful...