When a child chooses you over Disney, you know you’re special. Dennis Gutt certainly earned that honor after literally giving a piece of himself to save a life.

In 2013, the carpenter from Schuby, Germany, was surfing the Internet when he came across an organization called Be The Match, the largest bone marrow registry in the world. The then 19-year-old didn’t think twice about donating, but he never found out who his marrow went to… until years later when he received a message from halfway around the world. 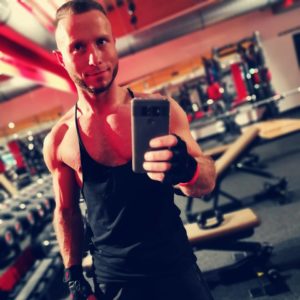 As it turns out, Dennis didn’t just save another person. He saved a baby — little Gabriel Smith from Springfield, Illinois. As an infant, Gabriel was diagnosed with aplastic anemia and went into bone marrow failure. At just 14 months old, he received Dennis’ lifesaving transplant.

Fast forward to 2018, when the Make-A-Wish Foundation contacted Gabriel’s family to offer the seven-year-old one wish.

“At first, he said, ‘Take my donor to meet Mickey,'” Gabriel’s mom, Lauren, told CNN. “But we couldn’t do that, so he was asked to choose one: Meet your donor or go to Disney. He chose to meet his donor, Dennis, without any hesitation.”

Fortunately, Dennis had already agreed to share his identity with his recipient’s family. Even so, hearing from them came as a bit of a shock. “I was speechless,” Dennis said. “I can’t believe that this happened and that he survived the bone marrow transplant.”

Dennis jumped at the chance to meet Gabriel in person, and in August, it finally happened. Make-A-Wish arranged for Dennis to travel to the U.S. for the first time ever, where he and Gabriel became inseparable.

While Gabriel didn’t go to Disney World, he got something even better: adventures with his own personal hero.

“He is part of our family now,” Lauren said. “He bonded instantly with Gabriel and our other two kids, Ebby and Xavier. We are hoping this experience will inspire others to donate blood and join the Be The Match registry.”

And incredibly, it did! On August 27, Lauren shared on Facebook that Dennis and Gabriel’s story has already inspired thousands of Americans to sign up with Be The Match. With one selfless choice, Dennis sparked a wave of potentially lifesaving acts. He’s not just a hero to Gabriel and his family: He’s a hero to us all.

Share this story to encourage others to consider becoming donors.

The a cappella music genre is getting more attention and popularity every year. Groups from all around aim to create instrumental music using only their vocals... It's simply a fantastic art form. Brigham Young...