Kevin Adkins of Wichita, Kansas, has visited the D & J Ranch every day for nearly 20 years.

After all, it’s where his closest companion resides — a 27-year-old horse name Vic. Since the moment Kevin bought Vic over 17 years ago, the two have been inseparable. That’s why the cowboy couldn’t imagine leaving the earth without seeing his best friend one more time. 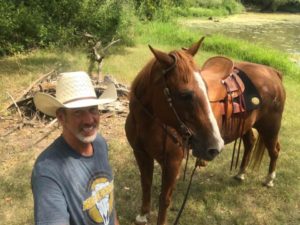 “They’ve been partners for all these years. It could be pouring rain, it could be snowing, it could be hotter than heck. He was always here,” said Jennifer Wadley, whose family owns the ranch. “It’s truly a love story between a man and a horse.”

Not even a cancer diagnosis could keep Kevin away from his beloved horse. While battling the disease, he spent as many days as he could by Vic’s side. But those cherished moments ground to a halt when the 55-year-old was admitted to the hospital. There, he learned he didn’t have much time left. After three years of fighting, he was dying. 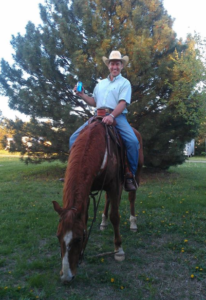 But before he passed on, Kevin had one last wish. It had been weeks since he’d seen Vic. He needed one last moment with his friend. So, his daughter, Delaney got in touch with the ranch’s owners. And in January, they made it happen. By then, Kevin had been moved to his sister’s house to spend the rest of his days. There, a special visitor came to greet him. 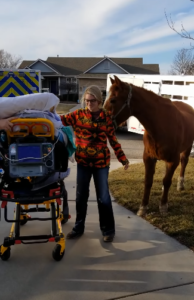 Kevin’s smile said everything as he stroked his friend and fed him — as did Vic’s soulful eyes. Jennifer says during their time apart, the horse missed Kevin just as much.

“I think he knew,” Jennifer said of Vic. “I think what was so moving was watching Kevin with his horse. He lived for his horse. It was very moving.”

It was as if Kevin held on just for this moment, because he passed away the next day. His funeral will be held on February 15, where Vic will serve as an honorary pallbearer. 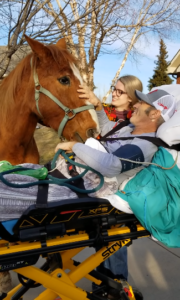 Rest in peace, Kevin. We can see how much Vic meant to you, and we’re so happy you both got the chance to say goodbye. Your love for each other will never die.

Watch the two friends reunite in the video below, and share this touching moment with other animal lovers.

When Cops Realize Veteran’s Home Is Falling Apart, They Rally Community To Help Her.

For most of the 1970s, Katheryn Baarson of Phoenix, Arizona, was an active duty Marine. After that, she entered the reserves and continued to serve her country until retirement. These...