Ken Richter’s life wouldn’t be the same without his furry companions, Chunky-Monkey and Cheyenne.

In fact, the Michigan dad knows his time on Earth would be over if not for the latter, a 6-year-old pit bull-Labrador mix. The heroic dog’s instincts are the reason her owner is still here today. 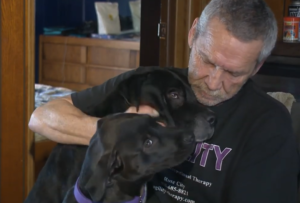 Cheyenne has always been a sweet girl, proving the stereotype surrounding pit bulls is wrong. That’s why Ken was so confused by her behavior during the early hours of January 20. It was 2:30 a.m. and the 52-year-old was fast asleep. He suddenly awoke to the dog “body-slamming” him.

“She never did anything like that,” he said. “She just stood up and slammed right into my back and I have had surgery, so she knows not to mess with my back.”

Ken was so caught off guard that he yelled in frustration. But it wasn’t long before he realized something was wrong — and that Cheyenne could sense it. He was in a lot of pain, later explaining, “My chest was hurting so bad I could barely breathe.” 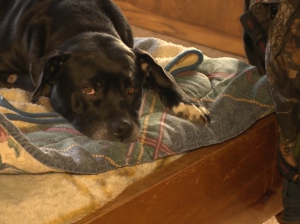 The pain grew so unbearable that Ken drove to the hospital in Gladwin. From there, an ambulance took him to another medical center in Midland, where he learned he’d suffered a heart attack.

“They said it was a bad one. I had like 99 percent blockage in my left ventricle,” he said. His doctor believes he was treated in time because of Cheyenne. If she hadn’t intervened, it’s likely Ken would have never woken up. Now he couldn’t be more grateful to his best friend turned hero. Thanks to her, his two children still have a father. 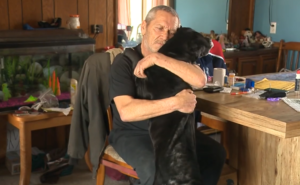 We’re sure Ken will spend the rest of Cheyenne’s life showering her with hugs, treats, and, of course, plenty of love. She certainly deserves it for being such a good girl!

Learn more about the life-saving pooch in the video below, and share this incredible story with other dog lovers!