David Ayres has dreamed of joining the NHL for years.

Growing up, he played ice hockey while his father and brother were goaltenders. You could say it was a family sport. But the Ontario, Canada, native’s life took a different turn 15 years ago when serious health problems left him in need of a kidney — which his mom donated to him. Little did the 42-year-old expect he would still be able to make NHL history! 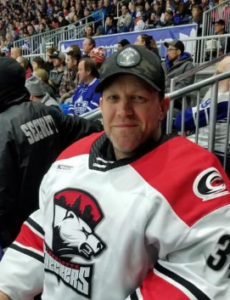 While David knew playing professionally after his transplant was unlikely, he stayed close to the sport. For the past eight years, he’s been a practice goalie for the Toronto Maple Leafs and the Toronto Marlies. He’s also worked as a Zamboni driver and an emergency backup goaltender.

When the Carolina Hurricanes played against the Maple Leafs on February 22, they lost both of their goalies to injuries during the second period. Luckily, David was in the stands with his wife  — and was ready to defend their net! The team quickly put together a jersey for him and sent him onto the ice for his NHL debut. 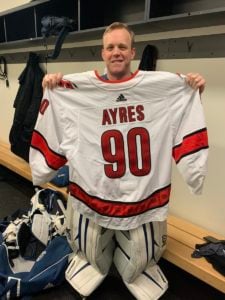 “I was confident until I hit the ice, and then I got terrified,” David said. “I just wanted to make sure I got on the ice and didn’t fall down.”

He did much better than that! It wasn’t long before his talent had fans cheering. While the first two shots got past him, he stopped the other eight pucks that came his way.

“It was awesome,” he added. “Obviously time of my life out there. I’ve been on this ice many times without fans. Put fans in the mix, it’s a whole different game obviously, but hey, once in a lifetime, I’ll take it.” 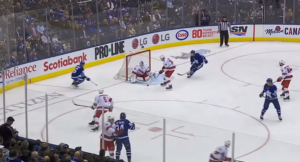 Not only did the Hurricanes win 6-3, but David became the first (and oldest) emergency goaltender to win in NHL history! He walked into the locker room that night a hero while his teammates cheered him on.

A memory we'll all have forever pic.twitter.com/LUxqs8o3Wr

His big win went viral and catapulted him into the limelight. His stick will be featured in the Hockey Hall of Fame, and the Hurricanes are selling shirts with his name on them. Better still, the proceeds will be donated to the kidney foundation of David’s choosing.

But perhaps the best thing to come out of the game was the emotional call that took place between David and his mom Mary on the “Today Show.”

“I always was very proud of you from the beginning,” she told him. “And this has just made me so extremely proud, I have no words. I couldn’t sleep the first night.”

Fifteen years ago, David Ayres, the Zamboni driver who recently played in an NHL game, needed a kidney transplant and received the kidney from his mother.

We surprised him with a call from his mom this morning! pic.twitter.com/wU9CFkzbdC

What an incredible debut! Congratulations on becoming an NHL legend, David. You’ve definitely earned it!

Watch David in action in the video below, and share this story to celebrate his win.