Dogs have an immeasurable potential to love, even after they’ve seen the worst that humankind has to offer.

One March day, West Palm Beach Fire and Rescue responded to reports of a brush fire near a homeless camp. When Captain Gregg Gordon and his team arrived, they were startled and appalled to find a small brown and white mixed breed dog tied to a tree in the midst of the fire. 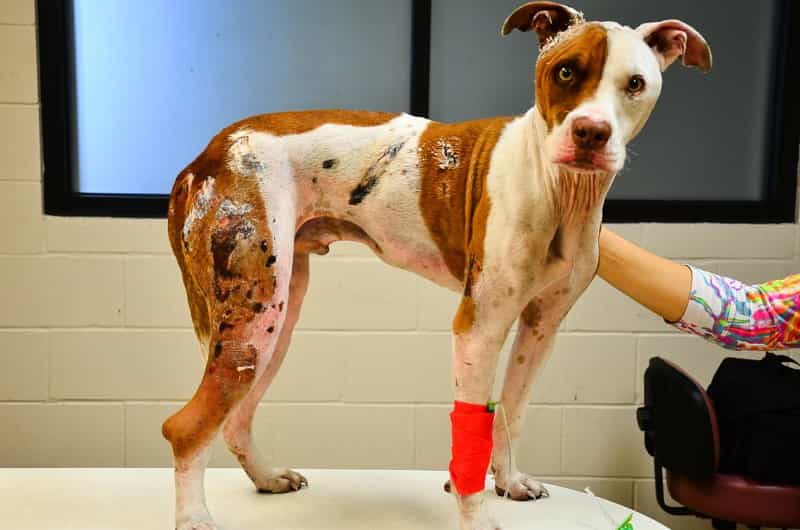 The poor dog was covered in painful open burns all over his body. Fearing the worst, firefighter Marcos Orozca cut the dog free from his restraints and carried him to safety. He was in such bad shape that the veteran firefighter wasn’t sure if he would make it. His wounds looked horrific and the dog was clearly in agony.

“The little guy was burned up pretty good,” Captain Gordon stated. “Even when we grabbed him, he was very distressed. I was concerned whether he would live.” 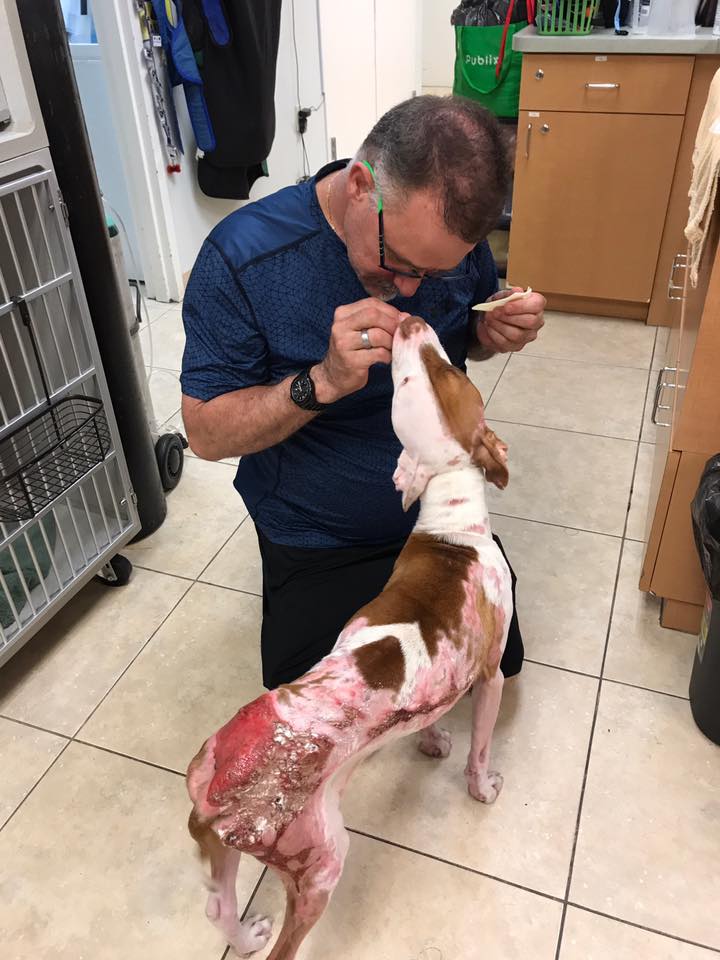 They rushed the dog to Peggy Adams Animal Rescue center where he was quickly evaluated by the veterinarian. They knew right away that the dog, who they named Smokey, had a long road of recovery ahead of him. The clinic transferred Smokey to the burn specialists at Jupiter Pet Emergency & Specialty Center (JPESC). 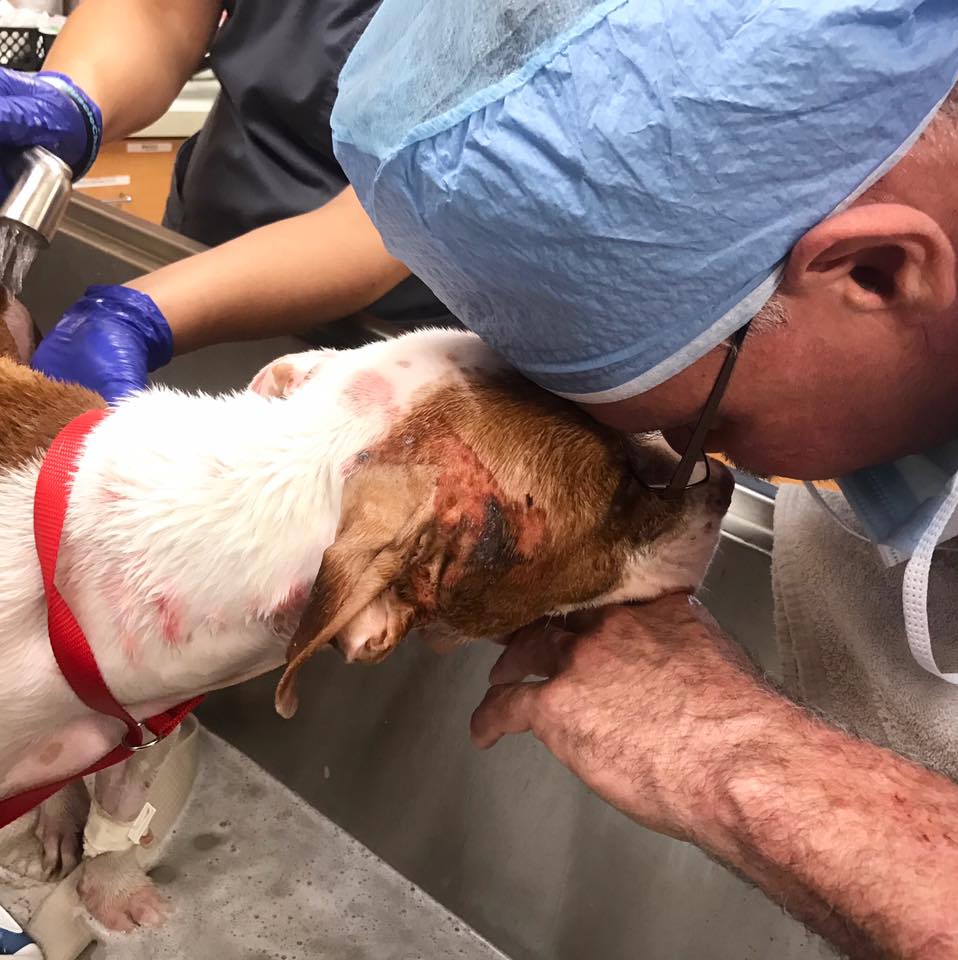 Even though Smokey had been chained up and left to die in a fire, he soon opened his heart to the people working to save his life. The staff members took an instant shine to the wounded dog, nurturing both his body and spirit as they treated him.

Smokey endured many blood transfusions, medicated baths, painful bandage changes, and trips to a hyperbaric chamber over the course of his recovery. Throughout all of the pain and heartbreak, Smokey still managed to learn to love and trust humans again. 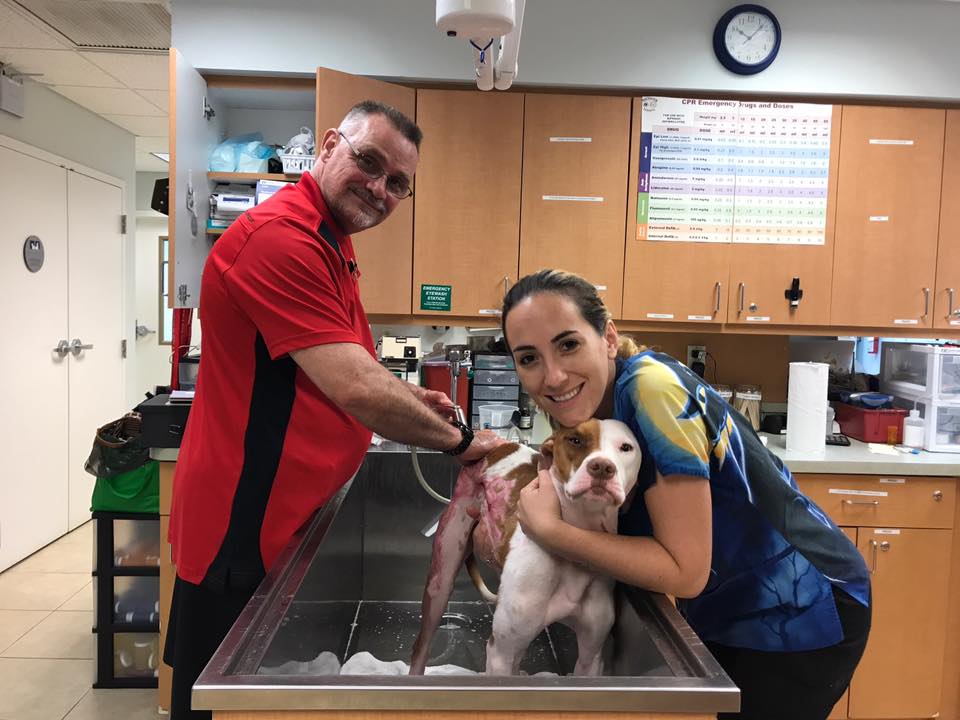 Dr. Federico Latimer was the primary veterinarian in charge of Smokey’s care, so naturally, the two formed a close bond as the doctor worked day in, day out to return Smokey to wellness.

Once Smokey was finally well enough to leave the hospital, it was Captain Gordon who stepped up to foster the dog until a forever home could be found. The firefighter was so impressed with how much the little dog had overcome that he simply couldn’t stand by and watch him languish in a shelter for one more day. 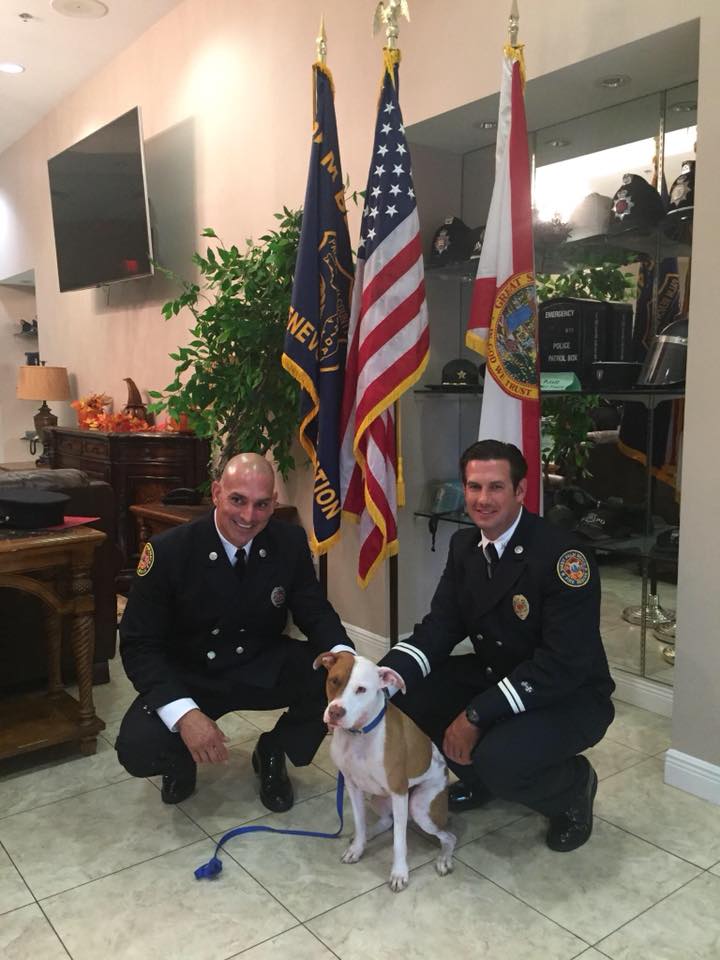 When Smokey was due to return to JPESC for a check-up, you’d think he was returning to a beloved childhood home instead of the vet’s office! In a video shared by JPESC, the dog has the most heartwarming reaction to seeing the people who worked so hard to teach him that not all humans are bad. 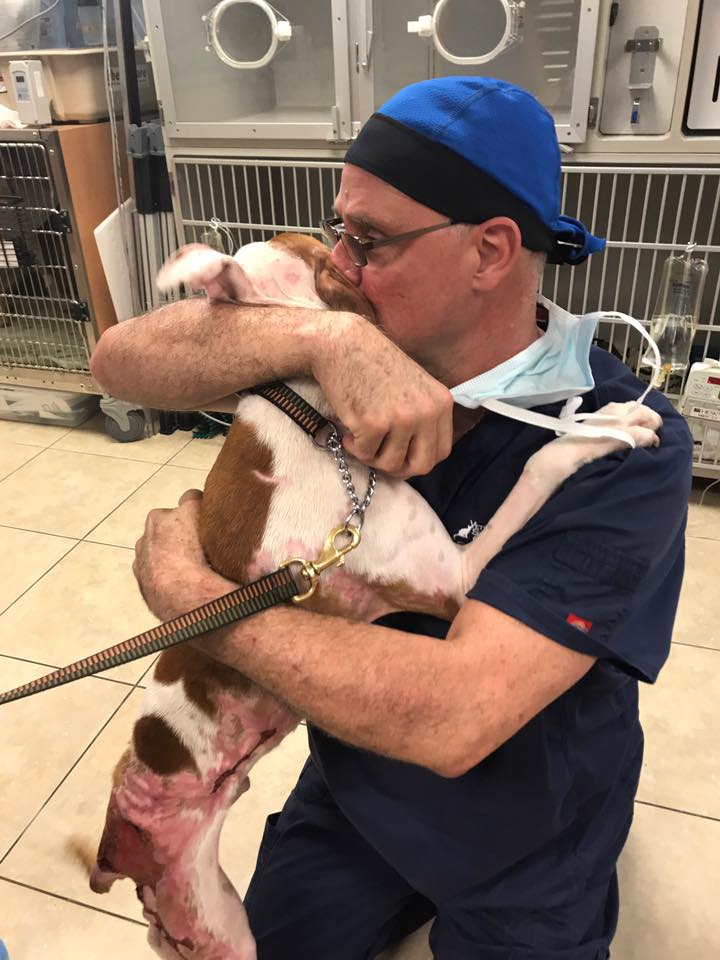 Tail wagging furiously, Smokey made his way around the room and greeted all of the vet techs who cared for him — but the real excitement came when he saw Dr. Latimer. 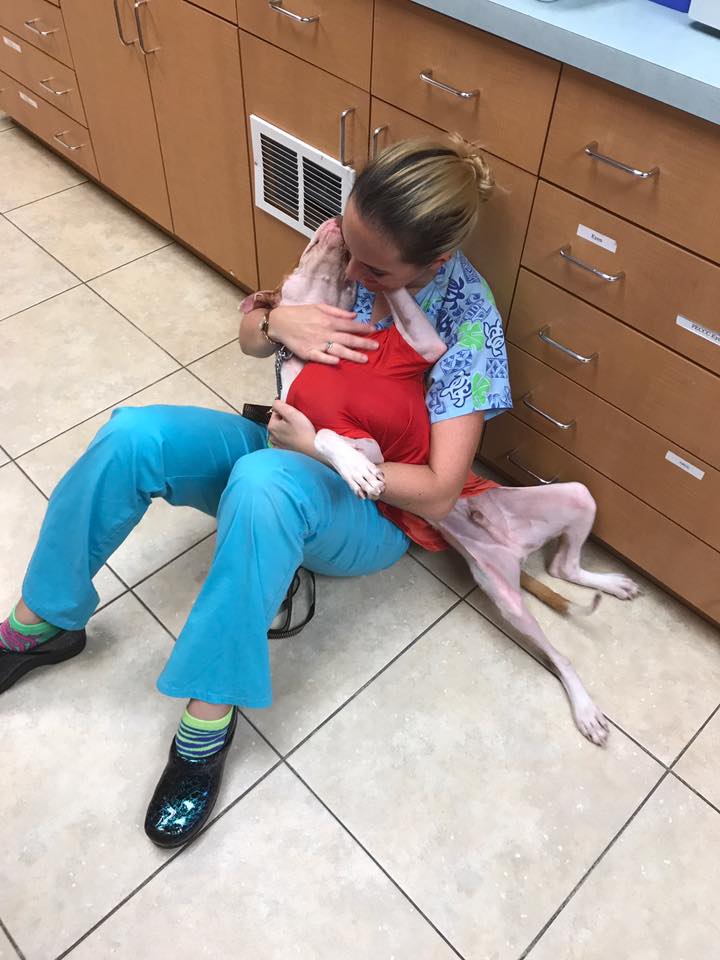 The second he saw his old friend and savior he launched into the vet’s arms, licking his face and showering him with affection. He even knocks the doc down onto the floor in his excitement, but Dr. Latimer doesn’t mind a bit. This affection goes both ways. 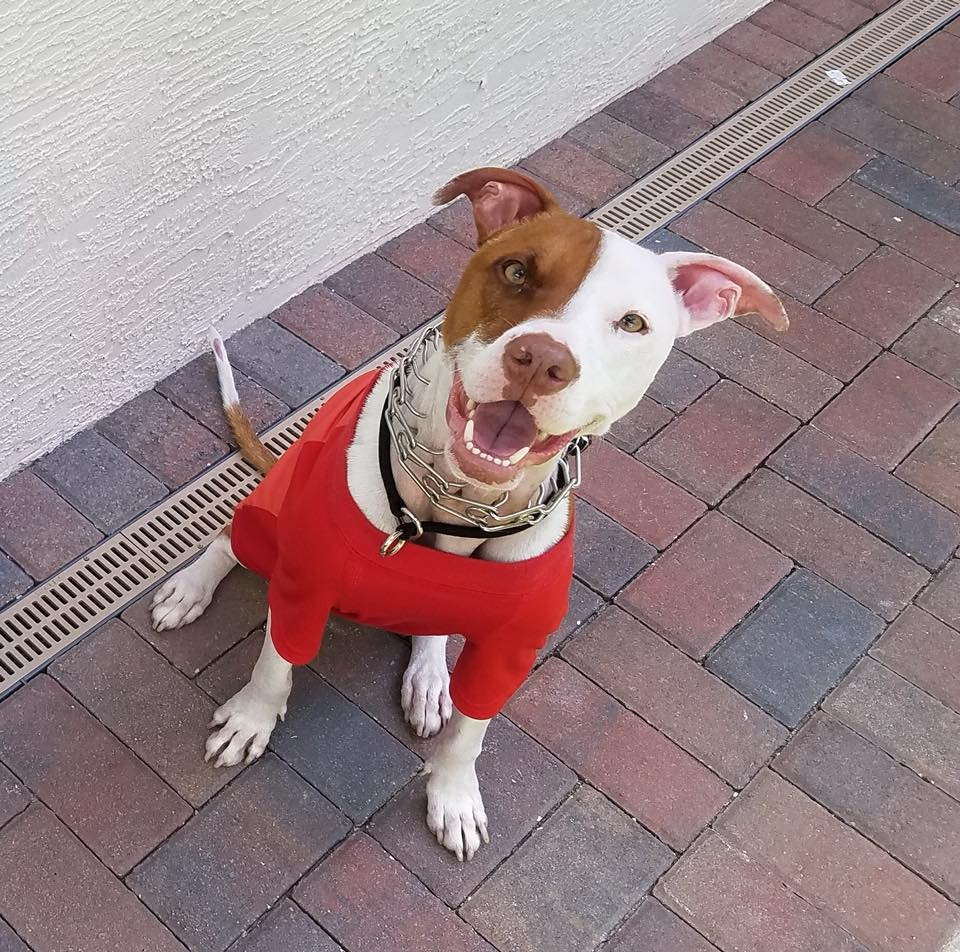 This is the sort of story that must be so affirming for people who work in veterinary medicine and rescue. They’ve made a real difference in this animal’s life, not only salvaging him from a horrific death and returning him to wellness, but also teaching him to love again. We can also learn from Smokey — no matter how much someone hurts us, we can never let it keep us from opening our hearts to other, more worthy people.

Watch Smokey’s beautiful reaction to seeing his old friends in the video below, and don’t forget to share.

Look who's BACK!!!!!! SMOKEY! Judging by this reunion, we are pretty sure that Smokey knows how much Dr. Latimer and all of his nurses helped him! ❤🐾