As far as Laura and Howard Serena’s family is concerned, theirs is the greatest love story of all time.

The Florida couple filled their home with laughter and joy for 73 years before Laura moved into a hospice facility in 2015. At 93, her life was drawing to a close. But her husband made sure she knew his love for her would never die. 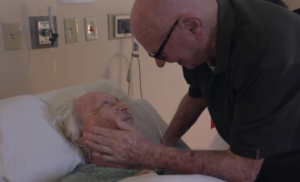 In September that year, the 92-year-old paid a special visit to his wife. Laura couldn’t see much at that point — and Howard was hard of hearing. But their connection was just as strong. While Howard can’t stand on his own, his granddaughter, Serena, helped him stay upright so he could sing Rosemary Clooney’s version of “You’ll Never Know,” their favorite song.

Neither Howard nor their family could hold back the tears as he softly sang the lyrics, “You’ll never know just how much I care / And if I tried, I still couldn’t hide my love for you.” 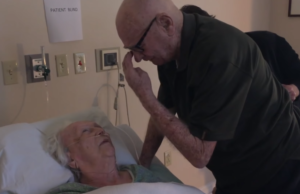 As their other granddaughter, Erin Solari explained, the song meant the world to them. It brought Laura comfort decades ago when Howard was away serving in World War II.

“At family gatherings, it was not uncommon for the two of them to sing this song together, each taking a verse and serenading the other.” Erin wrote. “In fact, after fifty years of marriage, they renewed their vows and performed this song as a duet for the entire family at the reception.”

In between “I love yous” to Howard, Laura turns to the camera, asking, “Isn’t he sweet?” before declaring, “He likes me!” 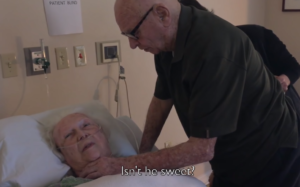 Laura’s health took a turn for the better and she spent the rest of her life at home with her family. It’s as if she was holding on for her husband, because she died five days after Howard’s passing. What a beautiful example of true love. Rest in peace, you two.

Watch Howard serenade Laura in the video below, and share to celebrate their love!