Ali Thompson was already having a tough day when a 13-week-old puppy was brought into her emergency room.

The second the Bradenton, Florida, veterinarian saw Bunny the pit bull unable to move on the examination table, she knew exactly what was wrong. Better still, she was determined to save her! 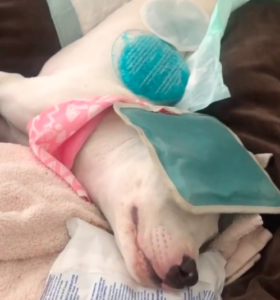 “I took one glance over my shoulder and said, ‘That dog has tetanus,'” she explained. “Tetanus is actually very rare in dogs. Humans and horses are much more vulnerable to the disease. It is a bacterial infection that causes ascending paralysis. It is something you might not ever see in your career, and if you do, you more than likely won’t see them survive to tell about it.”

Poor Bunny’s body was as stiff as a board, and her jaw had locked up so she couldn’t eat or drink. Saving her would take weeks of intensive nursing, IVs, and dropper feedings. Even with all that effort, there was still a 50 to 70 percent chance that she would not make it.

When Ali found out Bunny’s owner couldn’t afford the cost of treatment, she felt defeated, but there was something in the pup’s sweet expression that she couldn’t let go of. “I decided in my head that I was gonna be a crazy person and try to take this on,” Ali said. “I’m gonna do everything I can to try and get her to survive.” 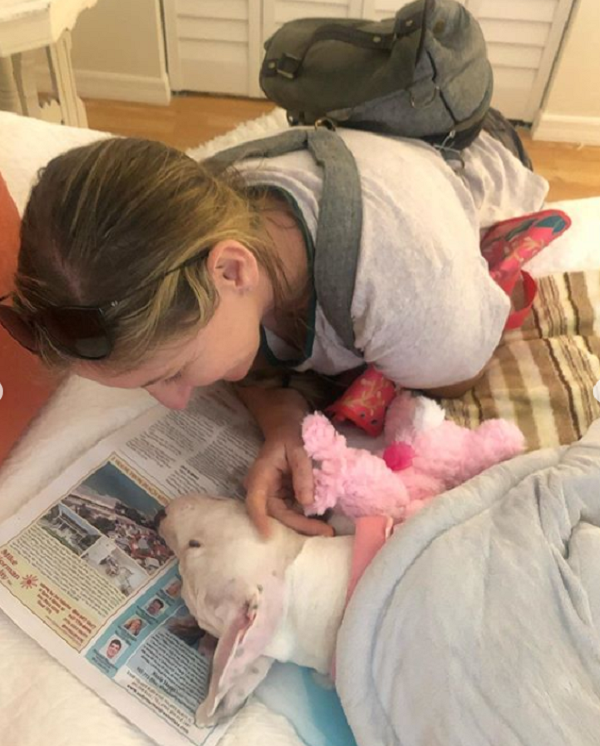 So she took Bunny home and began treating her. Dogs with tetanus must be kept in dark, quiet areas to decrease stimulation, which can lead to seizures and muscle spasms.

Not to mention, Bunny had to wear a sleeping mask over her eyes for two weeks while Ali administered IV fluids to stave off dehydration and fed her with an eyedropper. The caring vet also moved Bunny’s limbs around throughout the day to loosen her muscles and keep her from developing bed sores.

“That first night was terrible,” Ali admitted. “As were many of the others that followed. 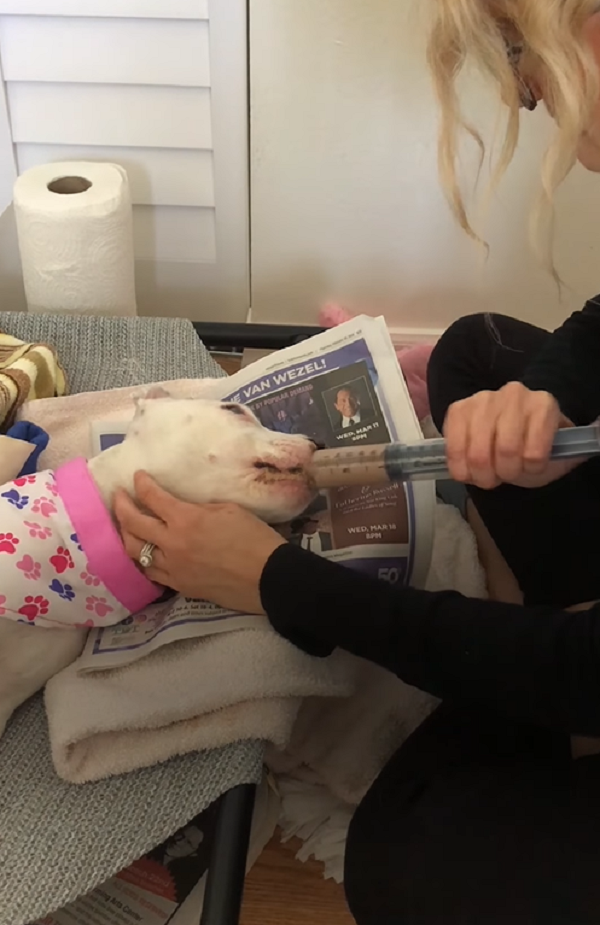 I couldn’t get an hour of sleep in. She required constant care. And I mean constant. … In any other case scenario, this patient would have been at a specialty care hospital with teams of nurses and doctors overseeing the case 24/7 for what I’m sure could have easily exceeded $10-15,000. I had myself and a makeshift treatment room at my house.

While Bunny’s prognosis remained uncertain, Ali refused to give up on her.

One day, she came home from work during lunch to check on the pup and found she’d turned a major corner in her recovery. Ali’s husband had taken Bunny outside for some fresh air, and when she saw Ali getting out of her car, she started running toward her! 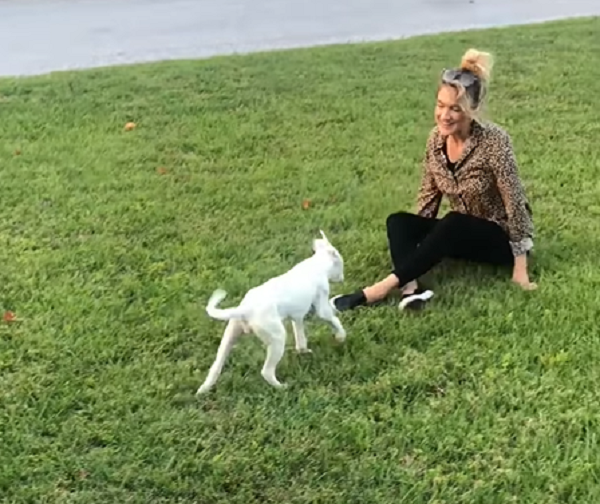 These days, Bunny is able to get around incredibly well, especially considering all she’s been through. Not only is she out of the woods, but she’s also enjoying life as a full-fledged member of Ali’s family!

After everything they went through together, Ali and her husband knew there was no way they could give the pup up. 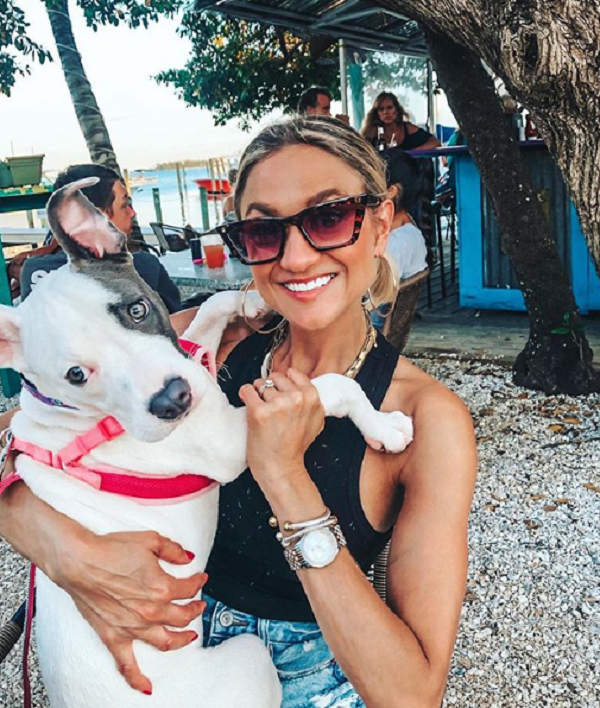 Throughout everything, Ali has been astounded by Bunny’s bravery and strength, noting that many other dogs wouldn’t have been able to pull through.

She also said she has nothing but gratitude for Bunny’s former owner, who did what was necessary to get the pup the care she needed.

“Bunny would not be alive and now walking around on her own if her owner hadn’t signed her over to me,” Ali said. “I am so thankful to him. I didn’t meet him, but I’ll always remember the selflessness that he showed to his puppy that I’m sure he already loved.” 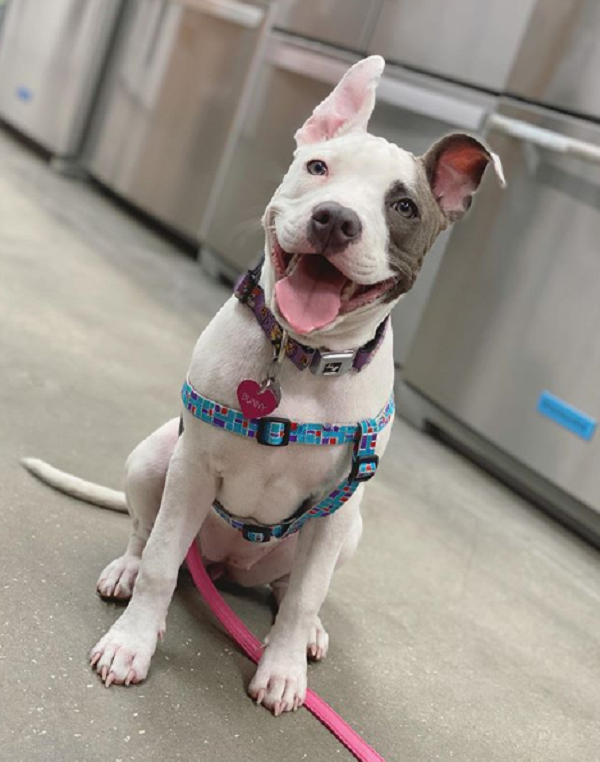 The transformation this sweet pup went through in just a few weeks is truly out of this world. We’re so glad she’ll be able to live a long, healthy life with her new mom!