Will Walker has been inspiring his community for more than five years now.

It makes sense. The 14-year-old from Savannah, Missouri, can put a positive spin on anything — even his battle with cancer. 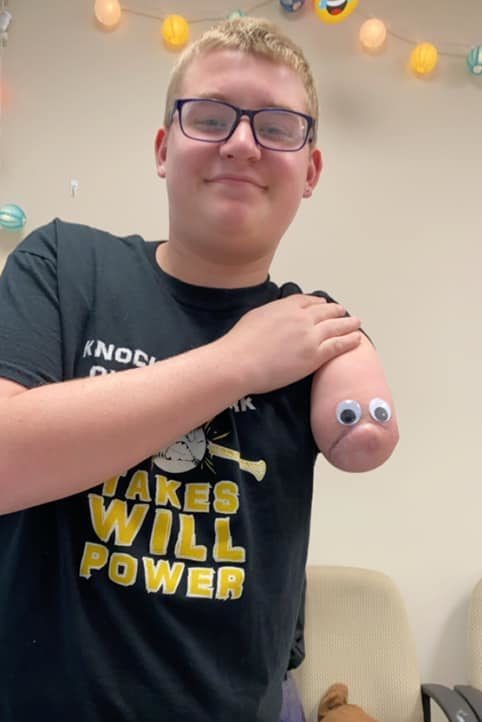 Will was diagnosed with synovial sarcoma in September 2014. As a result, the middle schooler lost part of his left arm, but nothing can take away his optimism.

“He is the happiest person that I’ve ever met,” said Rhyan Schrick, a classmate at Savannah Middle School. “And I tell everyone that even with everything that he’s going through.”

Basically, Will radiates joy, but it’s especially strong when he’s cheering for his favorite sports team, the Kansas City Chiefs. When he found out they would be taking on the San Francisco 49ers in Super Bowl LIV, he dreamed of being there in person. To show their support, his community was determined to make that happen! 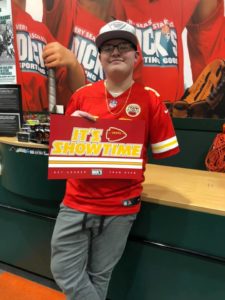 So in January 2020, a nonprofit called Fighting All Monsters (or life-threatening diseases) set up a Facebook fundraiser to send Will to Hard Rock Stadium in Miami, Florida.

Thanks to an incredible outpouring of donations, they raised more than $26,000 in just 10 days! 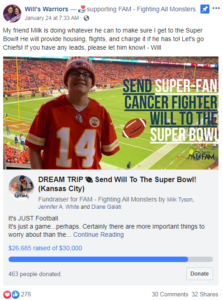 And the generosity didn’t stop there! Central Bank of the Midwest, a partner of the Chiefs, caught wind of Will’s story and decided to surprise him with a gift of their own.

During a school pep rally, the Chiefs’ mascot, KC Wolf, showed up to lead an unsuspecting Will down the bleachers. 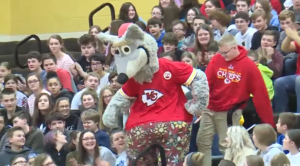 Then, in the middle of the gymnasium, Will’s dream came true when he was presented with two tickets to the Super Bowl!

“There were probably 600 kids cheering,” said Will Carter, the bank’s marketing manager. “It just blew us backwards there was so much excitement in the auditorium. It was a really awesome moment.”

“My heart was pumping,” the teen added. “I’m really excited.” 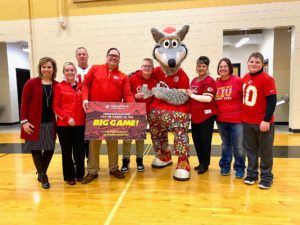 Now that Will and his mom have tickets, they’ll be able to use the money their community raised to pay for his medical expenses and other parts of the trip. Enjoy the big game, Will! You deserve it!

Learn more about how Will’s community came through for him in the video below, and share this story to spread more smiles.