What would you do if you saw a young mother struggling to push her son’s wheelchair through a heavy blanket of snow?

Probably come over and help her push, or grab your trusty shovel and start hacking away. But two Good Samaritans went much further than that, and news of their kind deed is proving once again that humanity truly is good at heart. 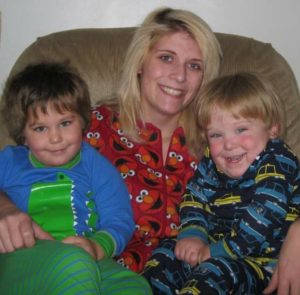 On November 2, Edmonton, Alberta, had its first heavy snow fall, and Shannon Ranger arrived as usual at her son Matthew Gessner’s school to escort him home. Matthew, 6, has spina bifida and uses a wheelchair, so it wouldn’t be easy, but still, Shannon declined someone’s offer to drive them. She, her other son, and his friend had all brought shovels, after all, and figured they could shovel their way along if nothing else.

But the snow was much worse than expected, and less than a mile from home, she realized she couldn’t make it. “I tried to call a cab, but the taxi company said it would be a 25 minute wait,” she recalled.

Meanwhile, a man who lives in one of the houses along their route had been watching their struggle, so he and his son headed outside with shovels and started clearing the sidewalk ahead of them. 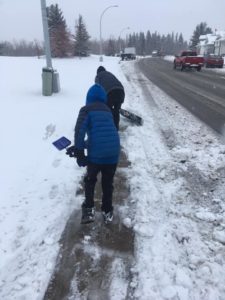 Then a second stranger appeared on the scene with a better idea: Wouldn’t it be easier to just carry Matthew home? So they lifted up his wheelchair and carried him a little more than half a mile! The son of one of the Good Samaritans followed along the whole way, repeatedly telling Matthew he was a king.

“He would say, ‘Oh, look at you, you’re a king,’ trying to make the situation better. And he smiled and he laughed and had a great time,” Ranger said.

With this kind of service, who wouldn’t feel like royalty? 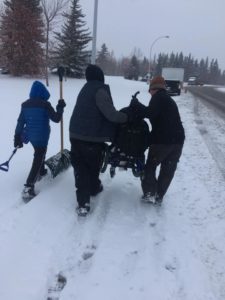 Later that day, when they were all snug and warm back home, Shannon jumped on Facebook to post about this incredibly sweet gesture, saying the men “really showed me that good people are out there (and) I couldn’t be more thankful today!!”

As an added bonus, once word of the kind deed started to spread, other homeowners on Shannon’s route home are now working hard to ensure the sidewalks are free of snow, just to make it a little easier on her. Unfortunately, she didn’t get these heroes’ names but plans to track them down so “they can get the credit they deserve.”

By doing what they did, these men set a perfect example for what it means to be a decent human being. There’s no reason not to offer your assistance when you see someone in trouble or struggling, it could even set off another chain reaction of goodness.