Well, I thought we were quite clever when we started using the term as two young lovebirds back in 2004. At the time, I had never heard the word before. We were at Benihana; there was a miscommunication with our reservation so they surprised us with their special anniversary treatment: song, dessert, and Polaroid picture. 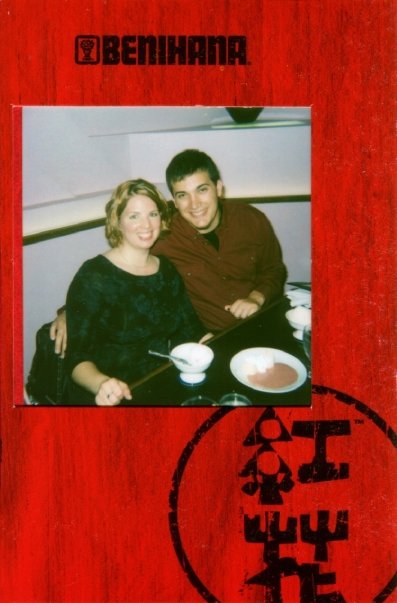 I’m not going to claim credit for coining the term. Thanks to the age of the internet, I’m pretty sure I have never in my life thought of anything that someone else didn’t already think of first. Turns out, I’m not very original.

What I am, though, is persistent.

My husband and I may quite well hold the record for most moversaries celebrated.

Just as most parents stop counting their baby’s age in months at a certain point, the same applies — I would imagine — to most couples. They stop celebrating their moversary once they get in the range of anniversaries or, you know, as they mature (or something).

Not us, though. This month, we will be celebrating our 171st Moversary.

Every month on the 22nd, we wish each other a happy moversary. There have been many times in recent years that it was late in the evening by the time one of us remembered — but we haven’t missed acknowledging a single one.

In the early months, we would go out for a special date every time the 22nd rolled around. Even for the first year or so after our eldest was born (thanks to Gramma’s generous babysitting offers) the two of us would get out of the house together on our moversary.

These days, our monthly date is whenever we can fit it in and often consists of fast food and running to Target without the kids. Still, on the 22nd we’ll take moment to wish each other a happy moversary.

This simple little gesture reminds us of the giddiness we shared when everything was new and fresh. Even though that excitement has long since faded into a comfortable familiarness, remembering our moversary serves as an affirmation that we still choose to celebrate our relationship, month after month.

It’s our thing. Though I am sure we didn’t invent it and I know we aren’t the only ones who celebrate. In fact, I found that someone submitted the term to the Merriam-Webster Dictionary in 2007!

Do you do moversaries? Which will you be celebrating next?

This story originally appeared on TODAY