Tyler Krueger is a man of many passions, which include school, hunting with his dad, and competing in the Special Olympics. Oh, and he loves giving out hugs.

But when the Michigan student with Downs syndrome became seriously ill, he had to take a step back and focus on his health. It all started a few years ago, when a flu virus affected his liver, kidney, and heart, causing all three to fail. Doctors implanted a heart pump to keep him alive, but what he really needed was a transplant. 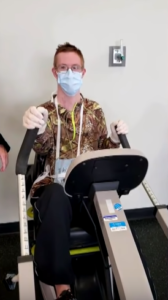 “His immune system was lower just from having Down syndrome and doctors were nervous that the risk of cancer [was] higher than the average transplant person,” his mom, Shelly, explained.

But fortunately, in September 2018, the Kruegers received the call they’d been waiting for. A donor heart was available. After eight hours of surgery, the transplant turned out to be a success. And while recovering at home, Tyler counted the days until he could see his teachers and classmates again. 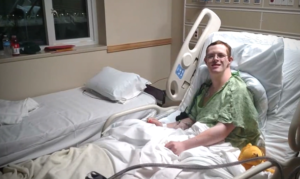 Seven months later, the 24-year-old finally got the all-clear to return to Pine Tree Center in Lake Orion. In April, the school shared heart-melting footage of Tyler running toward his teachers and fellow students as they cheered him on, holding balloons.

“He was ecstatic,” Shelly remembered. “Every time we’d go to the doctor, the cardiologist would ask, ‘Any questions?’ Tyler would say, ‘My class.’ He couldn’t wait to go back to school.” 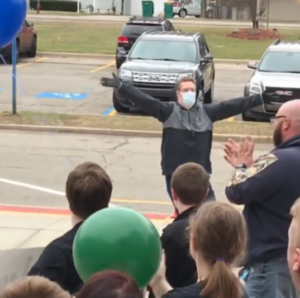 But before he could greet the rest of them, he had to share a long hug with one of his favorite people, social worker Rob McClellan. 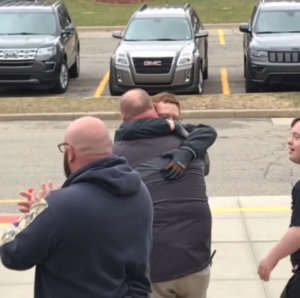 After doling out hugs, Tyler looked triumphant as he walked toward the building, ready to take on classes and schoolwork after everything he’d been through. You go, Tyler! 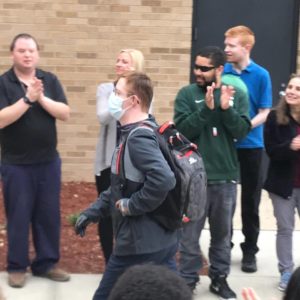 Welcome back, Tyler! Clearly, you were very missed and it’s not hard to see why. The happiness and joy you bring to everything you do shines so brightly. It’s no wonder everyone loves you.

Watch as everyone celebrates the young man’s return to school in the video below, and share to spread the love.

True joy: Pine Tree Center student Tyler Krueger returned to school today for the first time this year following his September heart transplant. The PTC family was there to greet him. #AlwaysLakeOrion