The hike up Table Rock Trail was already tough enough for Tia Vargas. In fact, her 76-year-old father, Ted Kasper, opted to wait a mile down as Tia crested the peak.

While descending the 11,106-foot summit to meet back up with Ted last year, the Idaho mom-of-three came across a heartbreaking sight. Limping alongside a group of hikers was an English springer spaniel, clearly lost and injured. The tag on his collar read “Boomer.” 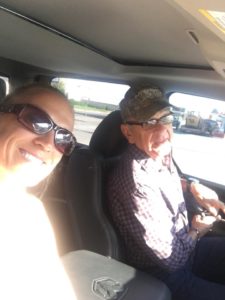 The hikers had been trying without luck to find the dog’s owner. They’d found a note at the bottom of the trail about a lost dog, and knew this had to be him. Because they were on their way up the mountain, Tia offered to take over and help Boomer down the trail. But it quickly became apparent she’d be carrying the 55-pound dog the whole six-mile trek down. The poor thing was very dehydrated with cuts, scratches, and a dislocated foot. 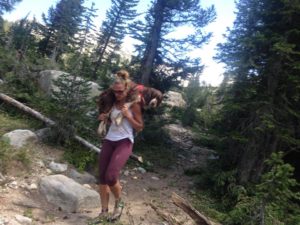 Tired as she was, Tia knew she’d have to find the strength to do it. So the 40-year-old hoisted Boomer over her shoulders and walked the mile down to her dad.

“He laughed and said, ‘You don’t think this hike is hard enough without carrying a heavy dog, too?'” Tia recalled. “And I told him, ‘Dad, this dog is lost and hurt. There’s nobody else. I can do this.'” 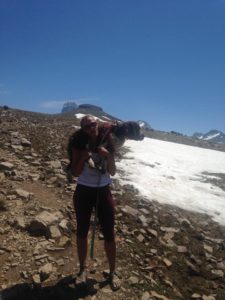 But the way down wasn’t as straightforward as Tia hoped. She and her dad got lost twice, as snow and debris covered the trail. Tia had to sit and slide down a snowy slope with Boomer in her lap at one point. Then, to make matters worse, it started raining. Exhausted, Tia didn’t know how much more she could take.

“I was in tears, thinking that I’d have to leave that dog behind,” she said. “And I didn’t want him to die.” 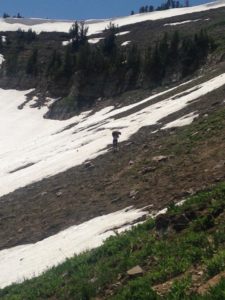 But she says she found renewed strength in what felt like divine intervention.

“I said a little prayer and I picked up Boomer and it literally felt like someone had walked up behind me and lifted the weight off my shoulders,” Tia added. Finally, after more than six hours, Tia and Ted reached the bottom of the trail, where they found the note and a phone number for Boomer’s owners. 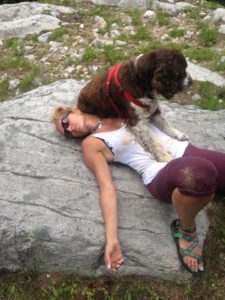 After getting in touch with the relieved family, Tia learned they’d been hiking the trail a day earlier on July 4. Boomer had wandered off and fell down a crevice, injuring himself. Though his owners searched for hours, they hadn’t been able to find him. 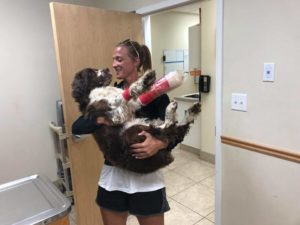 As it turns out, Boomer’s owners had been planning to rehome the dog before they lost him. But after they heard what Tia did for the pup, they told her he was hers if she wanted. It felt like fate. After forming an unbreakable bond on the mountain, Tia dreaded parting with her new friend. Now, as Boomer’s new mom, she’ll never have to. 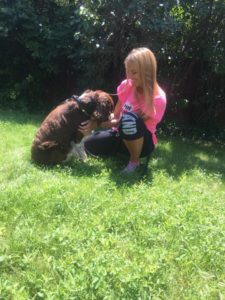 “I feel like there’s a reason why I was on the mountain at the very moment that he needed somebody to help. Both of us had a guardian angel that day,” she said.

Learn more about Tia’s grueling rescue mission below, and be sure to share with other animal lovers!

21 Dads With The Dogs They “Didn’t Want”

View this post on Instagram A post shared by Good News Movement (@goodnews_movement) The coronavirus made it nearly impossible to connect with family in person in 2020, so people had...