Joshua Ritter has Von-Hippel Lindau Syndrome, a rare autosomal dominant genetic condition that leaves individuals predisposed to getting tumors. After removing a tumor in his spine, Ritter needed a wheelchair to get around. He has 2 cysts on his kidneys and takes chemo for 7 brain tumors, however he’s still a bright and optimistic individual.

Thanks to Make A Wish, Ritter got to spend the day on set with the cast of his favorite show, NBC’s “Parks and Rec.”  The Ritter family found out the great news via telephone and were in disbelief. They traveled from Illinois to LA to meet all the current cast members. With the help of a friend, Ritter put on his spiffiest outfit and was ready for his big day. 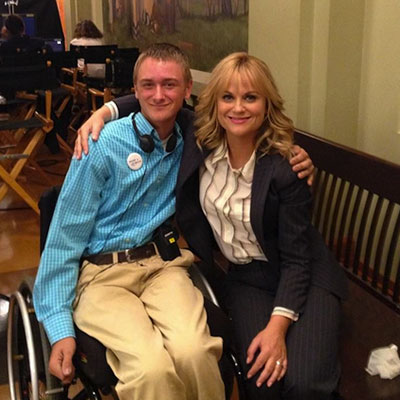 Amy Poehler, the actress behind main character Leslie Knope, SNL, and many other comedies, was incredibly down to earth and genuine. Ritter even did an AMA on Reddit to share details of his exciting day with other fans. He raved about the actress saying, “Amy Poehler was litt-rally one of the kindest and most loving people I’ve ever met. She just kept coming back for another conversation, hug, or picture…She made sure to get our contact information to send us stuff and check in every once in a while.” In fact, she’s still checks in from time to time and sends the family random gifts like show memorabilia and photos from the visit.

Amy insisted on taking selfies with Joshua on her own phone. 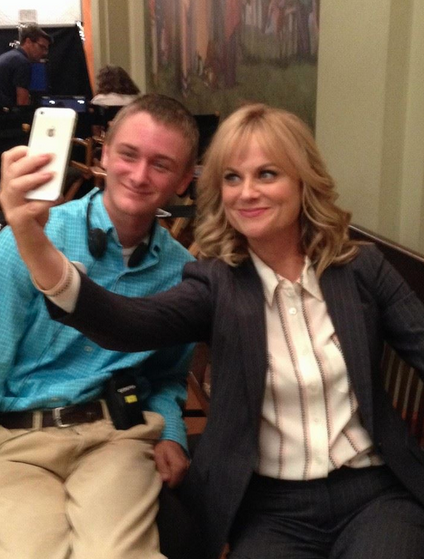 He describes this special day as the best experience of his life. Director Dean Holland and writer Matt Murray took the time to take Ritter behind the scenes and see how shooting for a hit tv show works. One of the most memorable characters, Ron Swanson, is played by Nick Offerman, and he really had Ritter laughing. Offerman and his character have just about everything in common according to Ritter.

Nick Offerman giving Joshua the firmest handshake of his life. 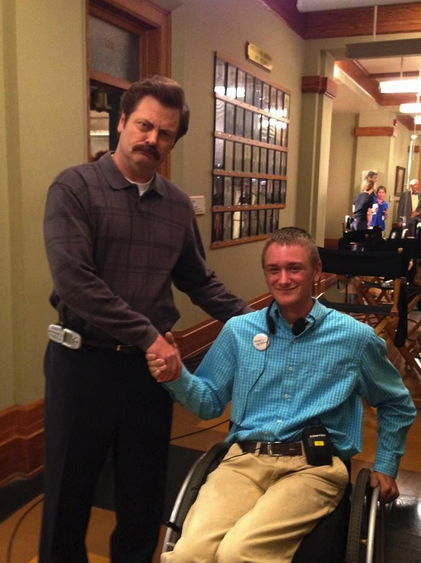 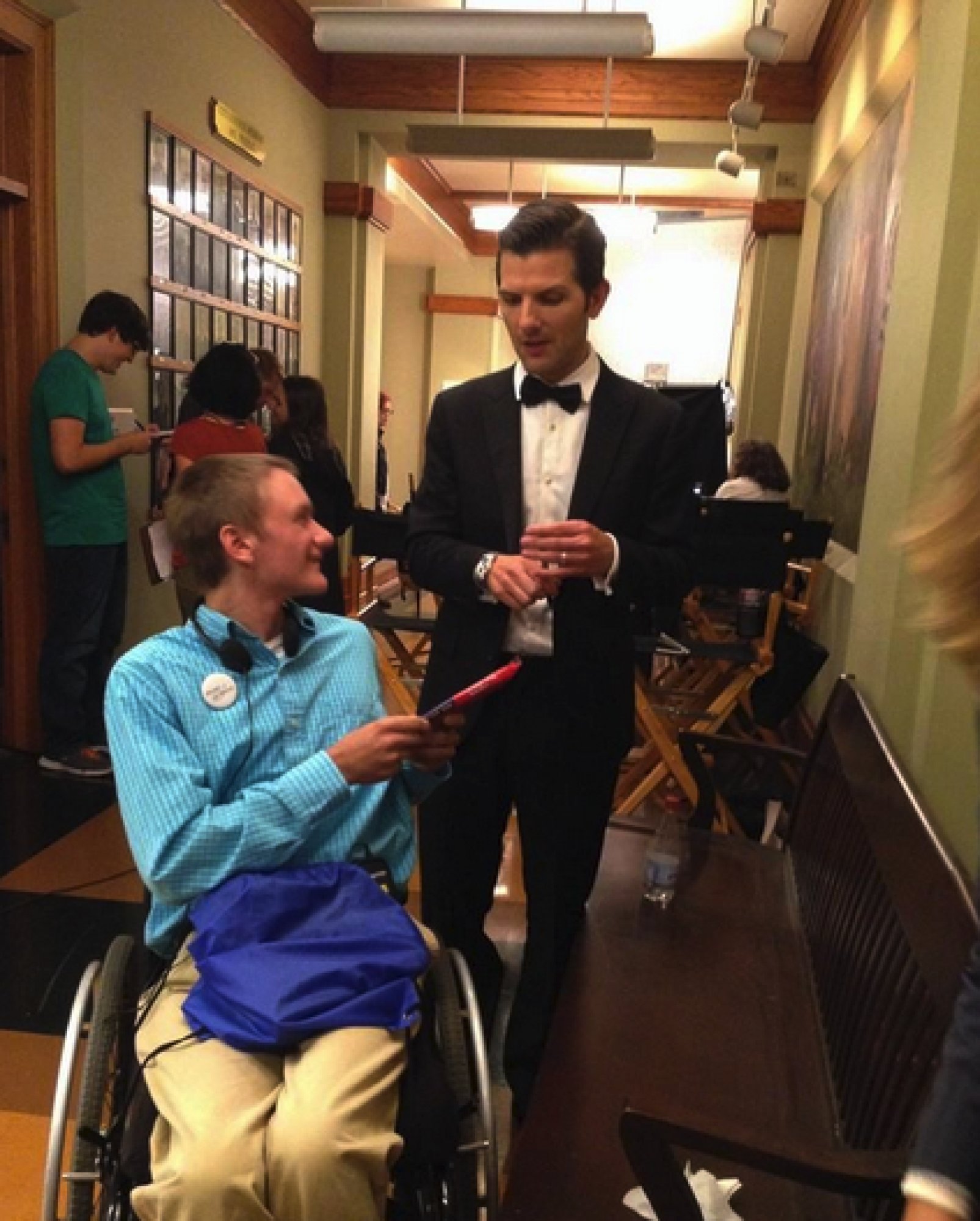 Aziz Ansari also showed up to the set on his day off just to meet Ritter. That is pure awesome. 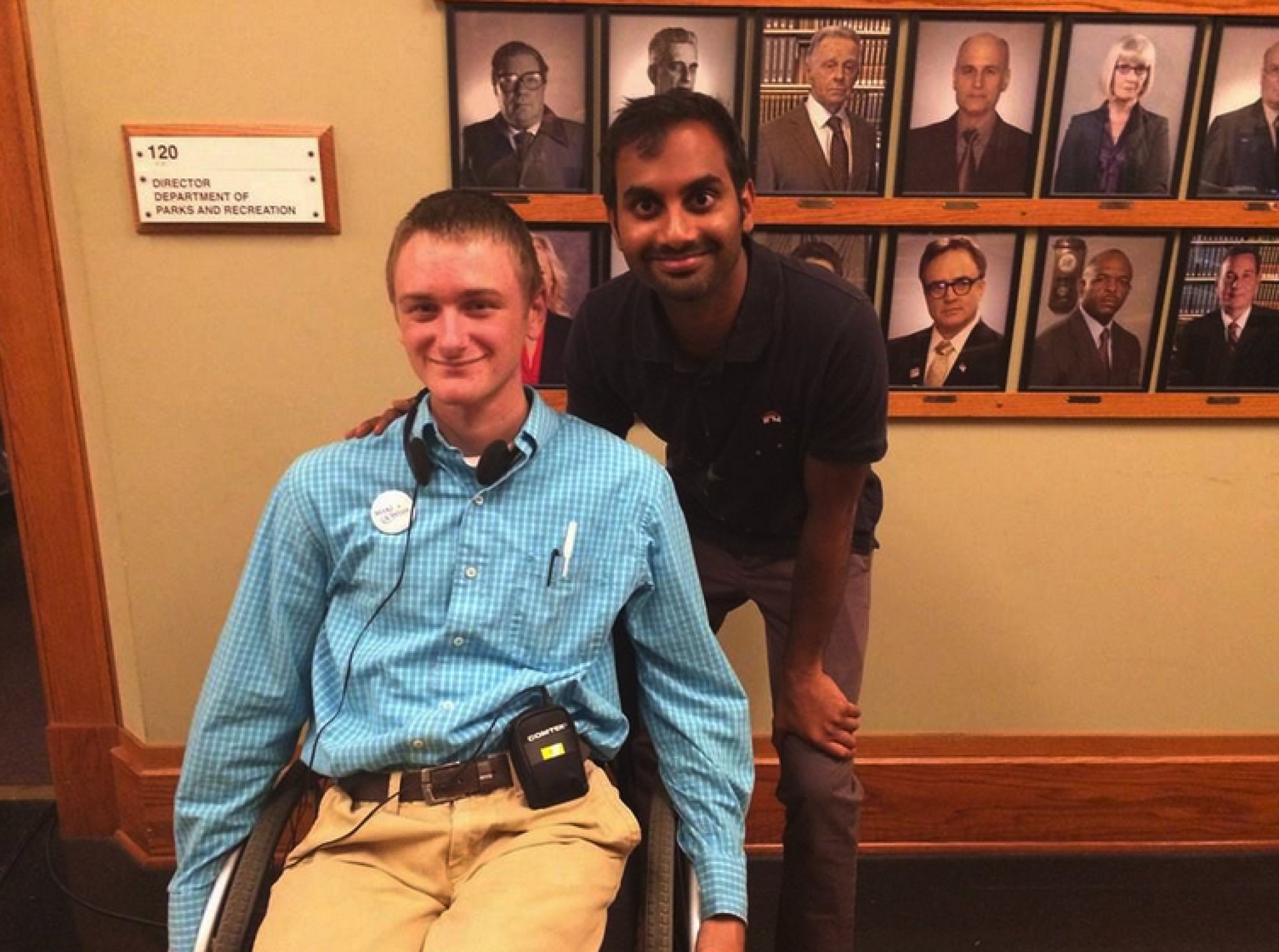 When describing the cast, Ritter said “Adam Scott is one of the most down to earth people ever. Aziz is one of the funniest guys ever, and Amy Poehler is one of the most loving people ever.” The cast made him feel like family and he got to do a hilarious clever rap he wrote for Amy. She loved it so much she had someone record it on her phone. It was overwhelming for Ritter to see how kind all of the stars are in real life.

The Ritter fam hanging out on set 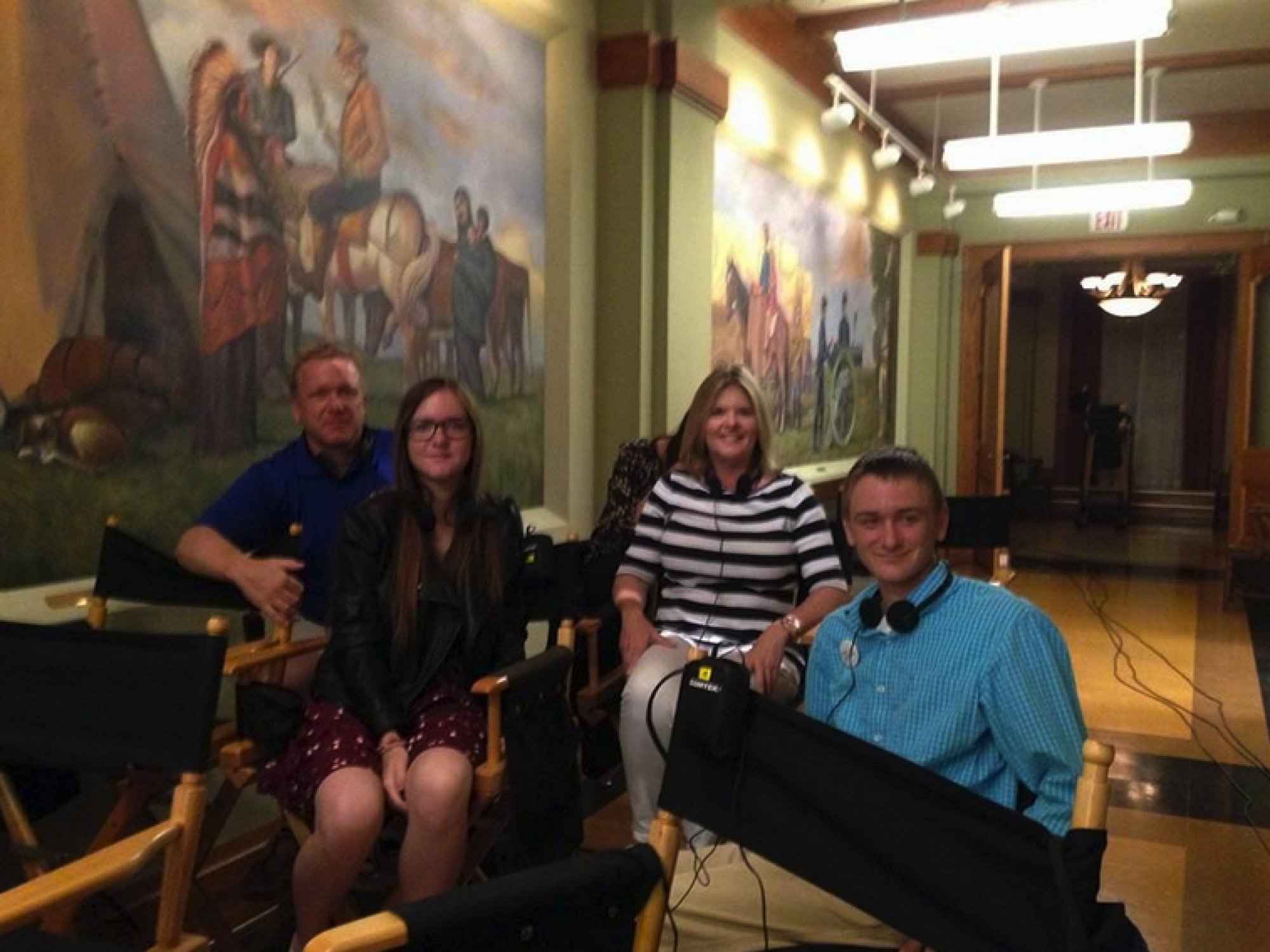 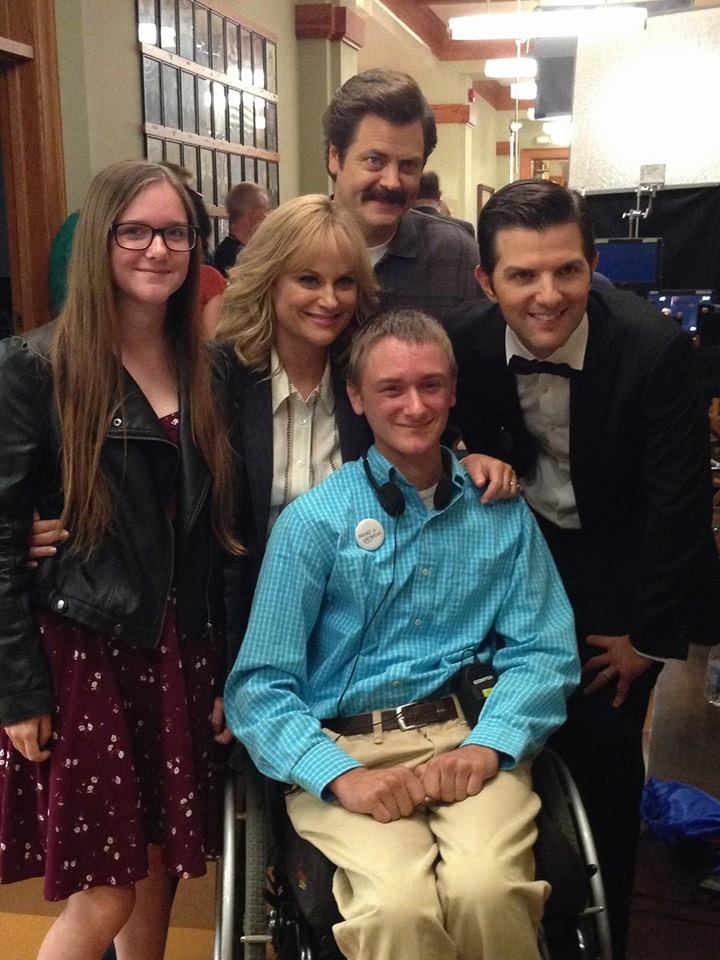 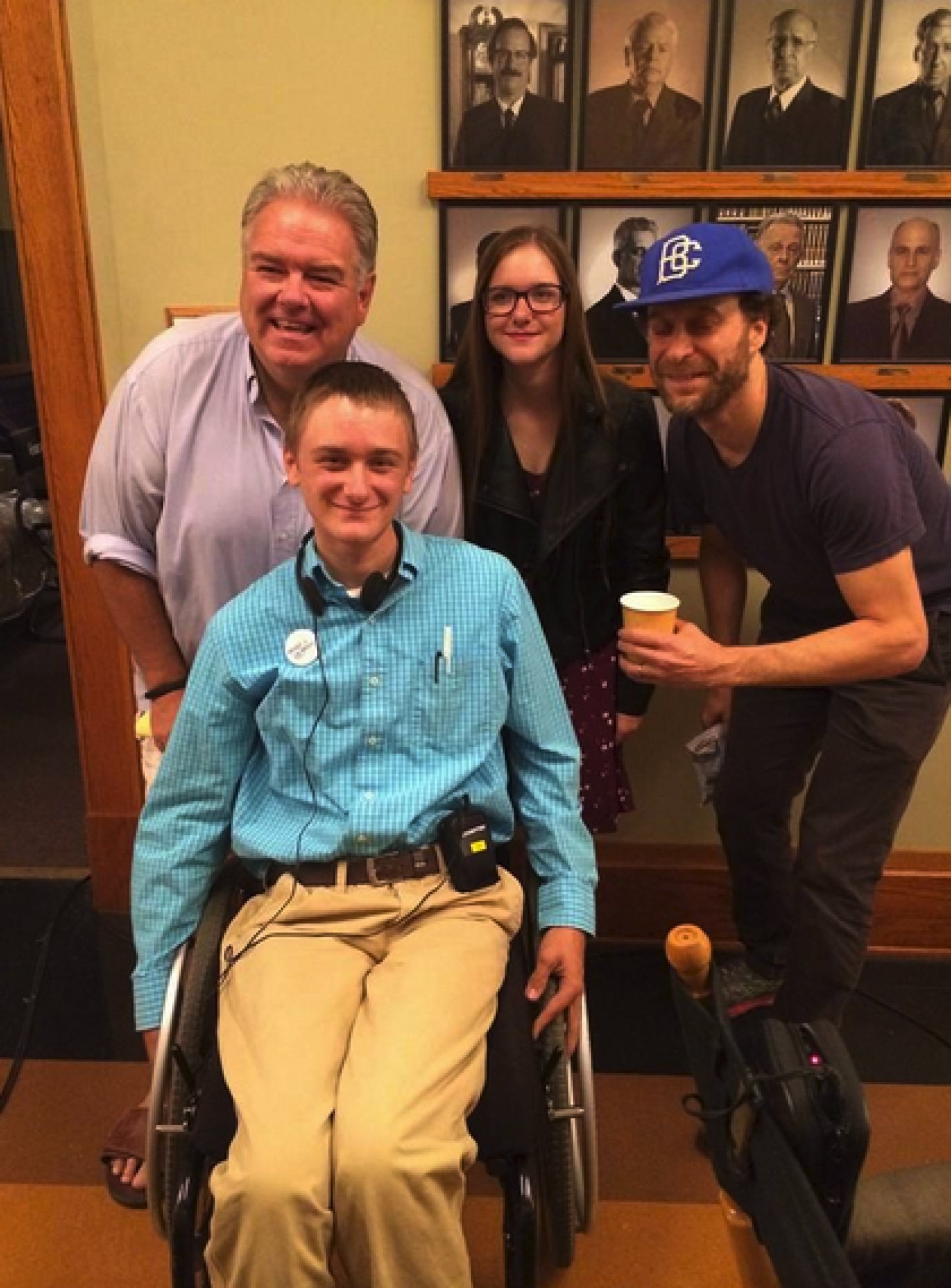 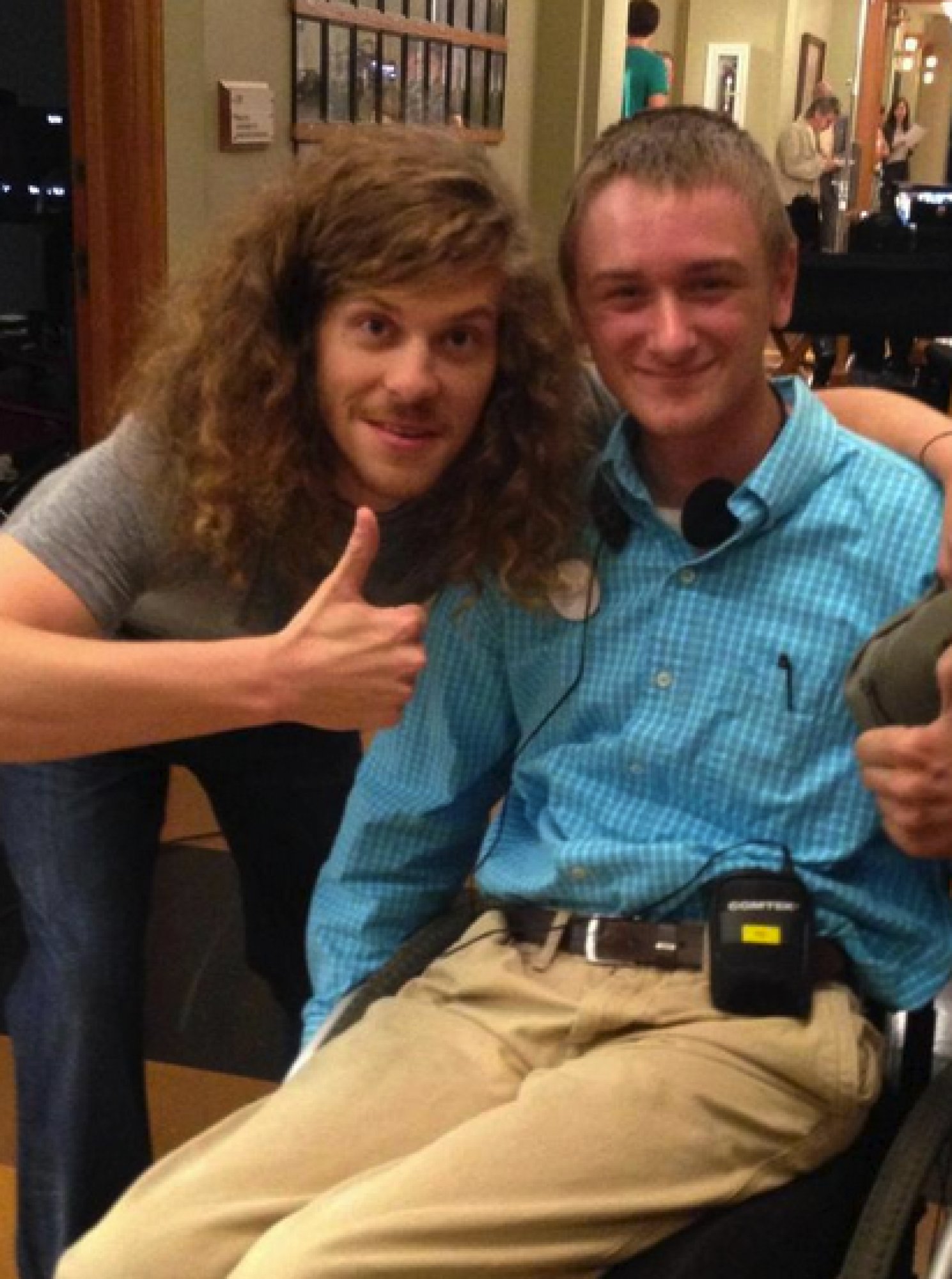 To top it all off, we found out that last year Ritter raised $115,000 through a direct mail campaign to donate to the St. Louis Children’s Hospital were he was taken care of. He’s been through so much in his life already, but he still manages to put others first. His real wish is that people will donate to Make-A-Wish after seeing how big of a difference it can make in someone’s life.

Mackenzie Hinson has been helping families in need since she was 10 years old. Back then, she learned a startling statistic: nearly 20 percent of Wayne County residents didn't know...