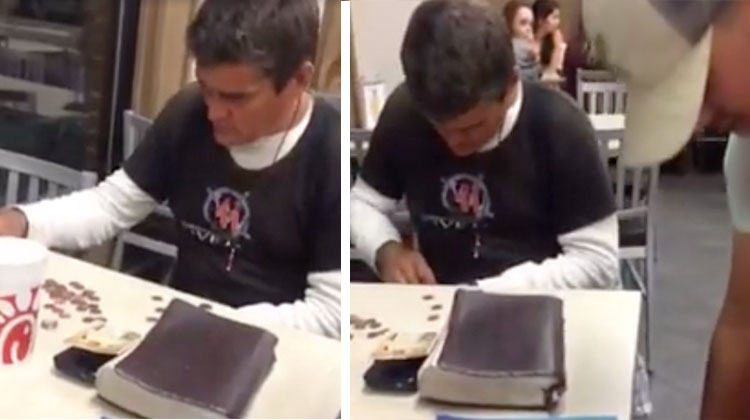 At InspireMore, we’ve seen some incredible examples of kindness toward homeless people. Little Ella Scott, who promptly gave up her meal so that a homeless man could eat steak and potatoes, did not hesitate to show compassion. Then there was the Dallas taco shop that left coats free for the taking outside of their restaurant. These stories were incredible, but the following tale is just fantastic.

Ryan Cook was with his buddies getting Chick-fil-A when he noticed a man who seemed to be homeless hanging out in the restaurant. The man was counting change with his worn bible on the table when Cook asked Chick-fil-A staff about his story. According to employees, the man was harmless and only approached others to get water for his dog, Sock.

So, Cook and his friends decided to help the homeless man as best they could. They bought a few gift cards for him then went across the street to Dicks Sporting Goods.

The teenagers spent their own money to get a jacket, beanie, t-shirts and a first aid kit for the homeless man, who said it “felt like Christmas.”

When the story started to take off, Ryan recieved some backlash from critics accusing him of attention seeking… but the young man made it very clear, “Just setting an example for everyone else. Be selfless and do good for others, then the world would be a better place for everyone. Felt the need to post this to inform others to do better not to gain anything from it.”

Amen to that! Share and spread Ryan’s awesome story of compassion today.