It’s important for children to see themselves in the world around them. Thankfully, more and more kids are experiencing that sense of belonging through their toys as companies become more inclusive.

Last year Mattel joined in, announcing its plans to create a Barbie doll with a prosthetic leg. And while New York teen Chloe Newman has long outgrown playing with Barbies, she and her mom Cindy were thrilled. They knew just how much the toys would mean to kids like Chloe. 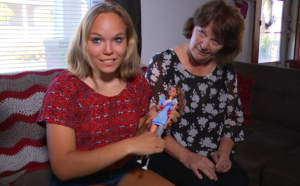 The 18-year-old has had a prosthetic leg since her parents adopted her from Kazakhstan when she was 1. So when Barbie Fashionista #121 was released, Chloe thought of an idea to get the dolls to more girls: She would buy 100 and donate them to people whose prosthetics are made at Shriner’s Hospital for Children in Springfield, Massachusetts.

Only she quickly ran into a problem. When she contacted Mattel to ask about buying the Barbies in bulk, she never got a response. 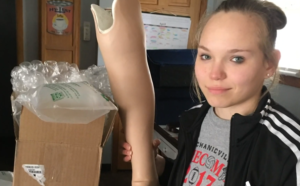 Chloe and Cindy tried Amazon next, but the site limited sales to about 20 Barbies per customer. Refusing to give up, Cindy turned to Facebook, offering to reimburse anyone who would help buy the dolls. She only expected to get a few takers, but their plan was about to get bigger than they had ever imagined! 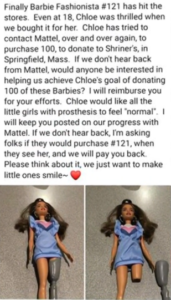 Not even a day passed before the mother-daughter pair had 200 dolls purchased on their behalf. “I was sitting next to my computer like crying,” Chloe said. “I was like, ‘Oh my gosh! How, how?’ This is great!” 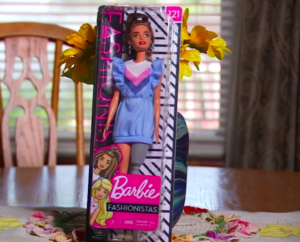 The best part, she said, will be seeing the looks on all the girls’ faces when they receive a Barbie that looks just like them.

Cindy was thrilled, but she said there’s still work to be done creating toys for little boys. She explained, “Somebody’s got to get on this because, yeah, we have half the population that has one leg represented, but we need the other half too.”

Cindy and Chloe plan to take the dolls to the hospital in October. In the meantime, they’re still accepting donations. You can email Cindy at [email protected] if you’d like to help.

Learn more about how Cindy and Chloe achieved their goal in the video below, and share to spread the word about these awesome dolls!