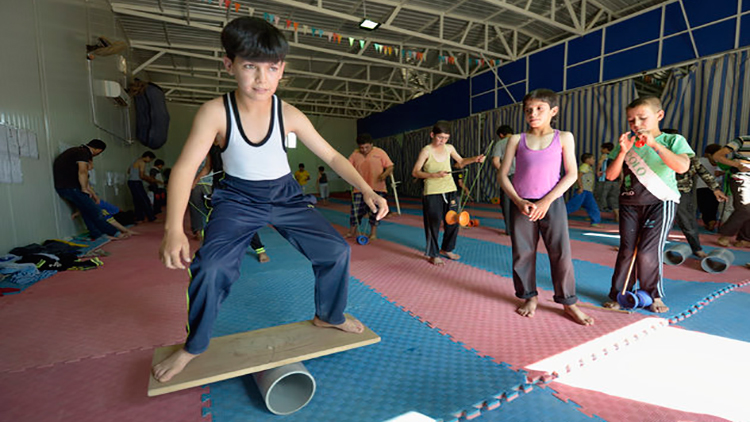 When Syrian Mohammad  Ghouzlan came to Za’atari refugee camp, he thought he would be staying just a few days.

Over two years later he is still living in what is now  the Middle East’s largest refugee camp. But he now has new hope and confidence thanks to an unexpected beacon of joy: the Circus School.

The Circus School was brought to the camp in 2013 by the Finnish non-profit Sirkus Magenta. The organization believes through “learning juggling, acrobatics, clownery and more, self-confidence, communication skills and physical fitness grow alongside trust – in oneself and others.”

Trust is crucial- and is needed in the now gang ridden refugee camp.

Ghouzlan sees the schools to be working. In an email to a Huffington Post reporter he wrote that the school teaches confidence and mutual respect and keeps the children from participating in crime.

Anwar, another boy in the school told a blogger who works with the circus, “I was lost before I met Magenta and before I knew circus.” He says the instructors at the school, “made my mind, my technique, everything around me, they made it good through the circus. With Sirkus Magenta I felt myself alive. They made me forget the war, the situation in Syria.”

Both boys are now instructors at the school. The Finnish instructors have departed, but they left some trained Syrians in charge. The Syrian staff still hold daily classes using instructional videos posted for them on YouTube by Sirkus Magenta. 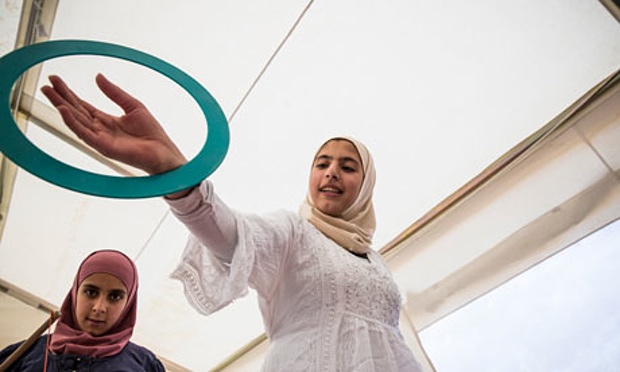 The school benefits both men and women, young and old.

Mariam, a 40 female who is now one of the Syrian instructors said, “I personally believe that the circus did a better job that what a psychologist/psychiatrist would’ve done… the circus directed the energy those girls had positively rather than negatively because their psychological state changed, and I believe that this change will remain for a lifetime.”

Refugees that attend the school love it. It gives them a safe place to learn  and grow for two hours each day. For many of them, they have not had this safe place for years.

Though it looks like all of the other tents, the circus tent is bringing hope to the 85,000 people who are staying at Za’atari, waiting to go home.

Use this story as a powerful perspective to be thankful for what you have and to be creative in how you help inspire others.