It’s a heartbreak no pet parent wants to face, but one they know is inevitable from the moment they bring home their beloved furry friends: having to say goodbye.

The news hit Maci Hanson and her family hard when they discovered their sweet Labrador, Stitch, had lymphoma. He didn’t have a lot of time left, so Maci pledged to fill his final days with all the love — and burgers — she could. 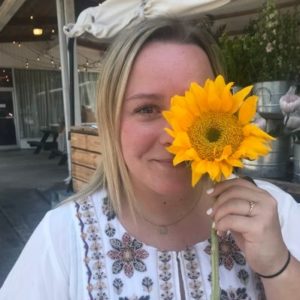 Stitch’s favorite treat is a beef patty from the fast food restaurant Whataburger, and while Maci planned to spoil her pup with the delicious food, she wanted to do more. After all, she was celebrating his life. So the dog mom from Little Rock, Arkansas, decided to give her good boy the best possible send-off. 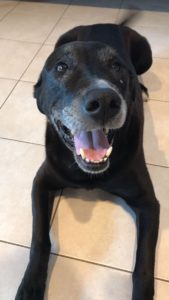 Maci figured if she was going big, she might as well go all out. In May, she tweeted to the burger chain, asking if they could help her throw a Whataburger-themed party for Stitch before he passed away.

They got back to her within a day, arranging to send a care package filled with orange balloons, party hats, and plenty of good food. And on May 25, the family got together to honor Stitch. 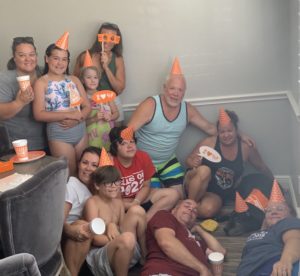 They showered their special boy with love, snuggles, and all the Whataburgers he could eat. It turned out to be his final day on Earth, and one of the best of his short life. 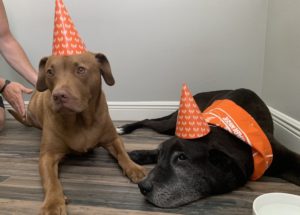 A few days later, Maci announced Stitch had passed away on May 26. She says thanks to the restaurant, Stitch’s last great experience will always be the light that shines through her loss.

“Sunday morning Stitch crossed the rainbow bridge where he’s now bouncing around on cheeseburger clouds,” she wrote. “He was surrounded by so much love & we were fortunate to have Stitch’s Whataburger party making his last day so special!” 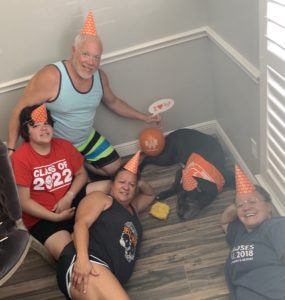 Whataburger tweeted a heartfelt message for Stitch as soon as they heard the news. “The most pure and deserving Whatafan- We will miss you sweet, Stitch!” 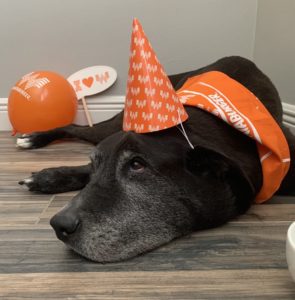 While nothing can dull the sharp edges of Maci’s grief, it was incredibly comforting for her to know his final days were filled with love. What’s even better is that she learned the restaurant had come through for other dogs before they died as well. 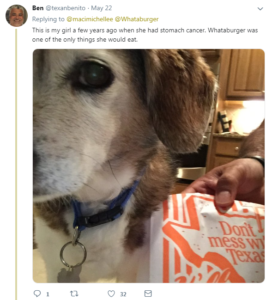 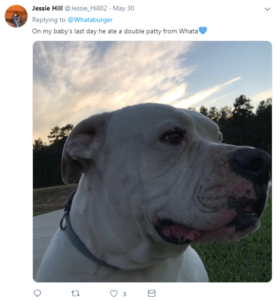 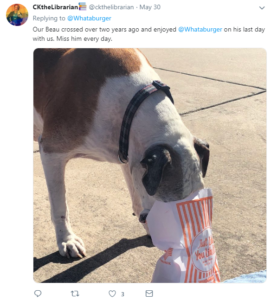 Rest in peace, sweet Stitch. You are so loved by your family and the thousands of strangers who’ve seen your story. Wherever you are, we hope you’re enjoying a nice, juicy burger.

Share this story to spread the love to other owners whose pets have crossed the rainbow bridge.