If you grew up surrounded by animals, it can be tough to adjust to apartment life, where pets are often not allowed.

Jack McCrossan is a 23-year-old engineer who moved into a flat in Bristol, England, four months ago. Like many people his age, Jack shares his apartment with three other young engineers who hail from different areas of the United Kingdom. The one thing missing in the young roommates’ lives? A dog to call their own. Thankfully, there’s a very cute one who happens to live right next door. 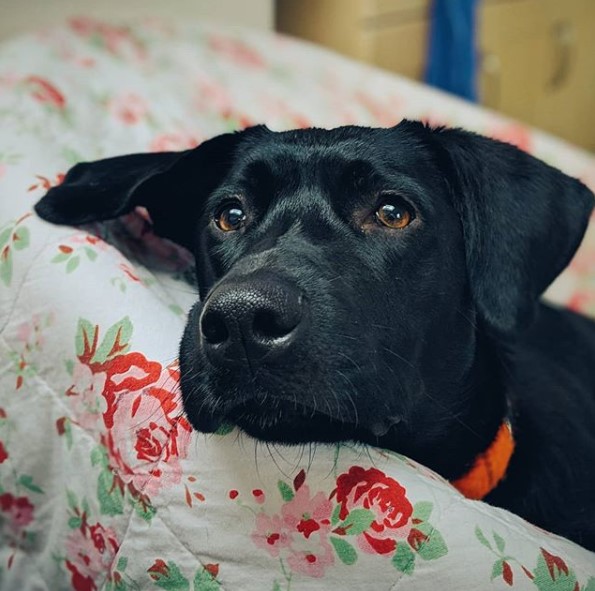 Stevie Ticks is a German shepherd-lab mix who belongs to Jack’s next-door neighbors Chris and Sarah. Each day when Jack and his roommates get home from work they see Stevie in her apartment window and wish they could play with her. One day, Jack decided to write the neighbors a letter to ask if they would ever consider letting them play with, walk, or otherwise be friends with their dog. 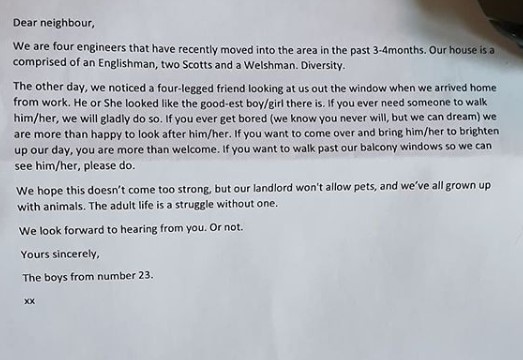 “Dear neighbour,” Jack wrote. “We are four engineers that have recently moved into the area in the past 3-4 months. Our house is compromised of an Englishman, two Scotts, and a Welshman. Diversity.

The other day, we noticed a four-legged friend looking at us out the window when we arrived home from work. He or she looked like the good-est boy/girl there is. If you ever need someone to walk him/her, we will gladly do so. If you ever get bored (we know you never will, but we can dream) we are more than happy to look after him/her. If you want to come over and bring him/her to brighten up our day, you are more than welcome. If you want to walk past our balcony windows so we can see him/her, please do. We hope this doesn’t come [on] too strong, but our landlord won’t allow pets and we’ve all grown up with animals. The adult life is a struggle without.”

To his surprise and delight, a letter soon arrived in the mailbox of #23 addressed to “the boys.” They could immediately tell the letter was from Stevie herself! 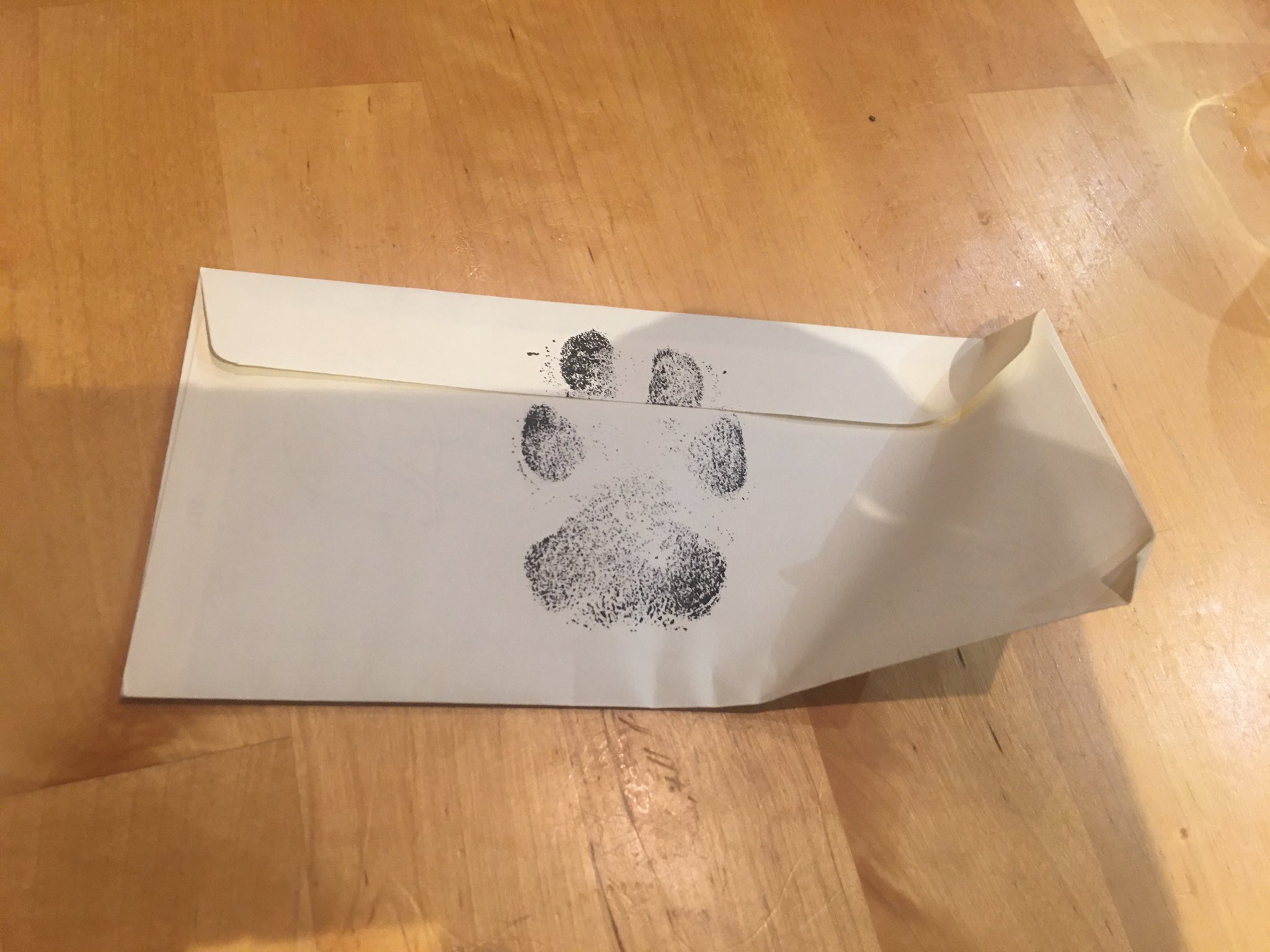 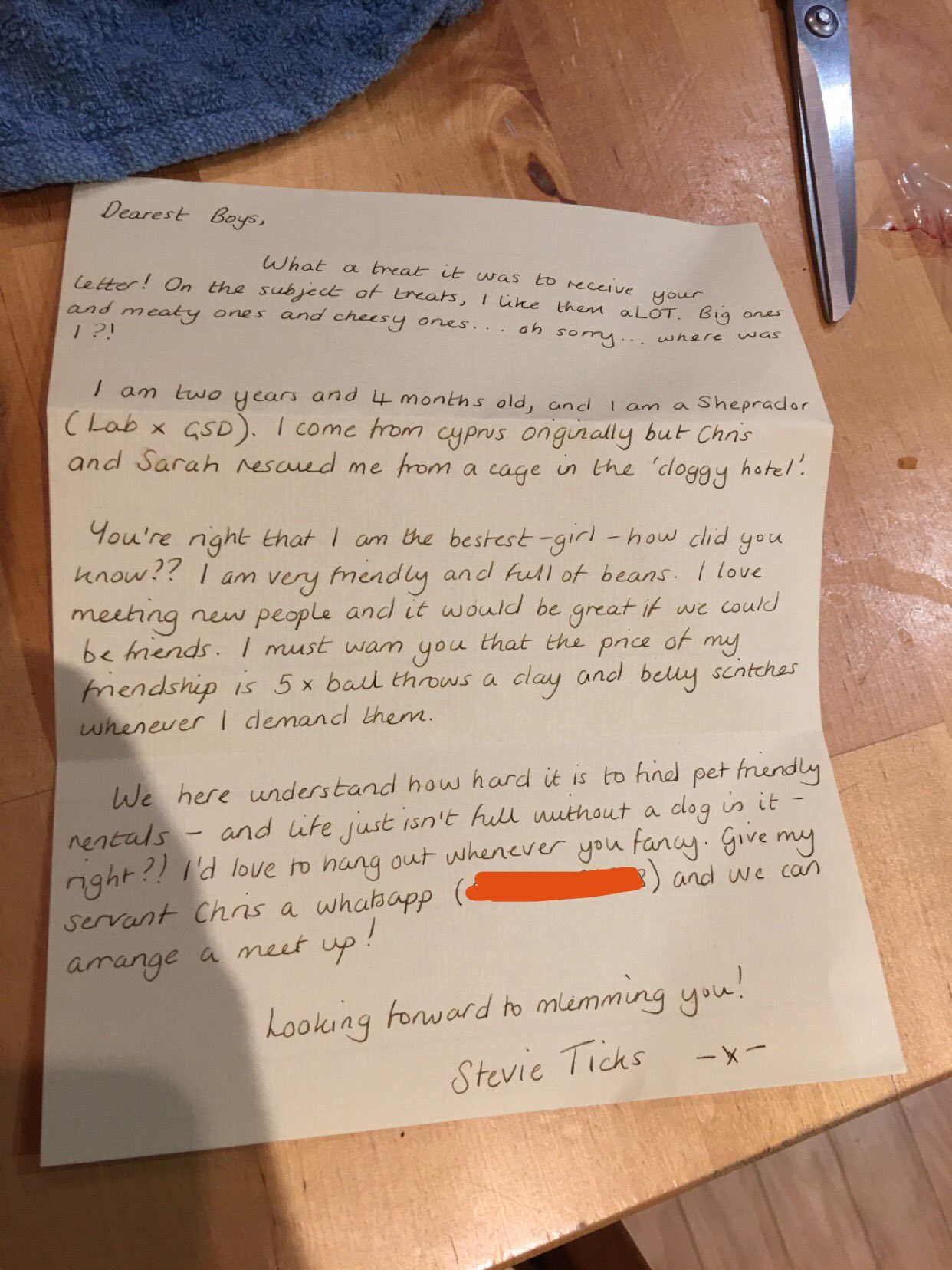 “What a treat it was to receive your letter,” wrote Chris AKA Stevie. The letter went on to give some basic information about Stevie’s age and breed, and much to the boys’ happiness Stevie’s owners graciously agreed to let them hang out with her anytime they wanted.

Jack was so thrilled with the wholesome exchange that he shared the letters on Twitter, where the story quickly went viral. “Been saying we’d love a dog about the house but our landlord doesn’t allow pets, so my housemate posted a letter to our neighbours asking if we could walk their dog every once and a while and the response was better than we could have ever hoped for,” he wrote.

It wasn’t long before the boys finally got a chance to meet Stevie in the flesh. 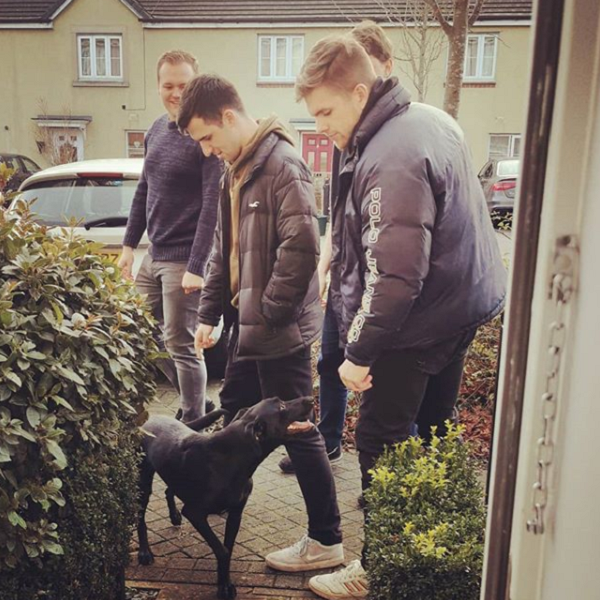 Stevie, who of course has her own Instagram page, soon shared a picture of the first time Jack and the boys came over to say hello. “Sneak peek of my first meeting with the boi’s! 20/10 for scritches, did mlem, snaccs given. 5/5 Uber rating, would meet again!” Steve wrote.

As the Twitter clamor grew ever louder, Jack soon shared a picture of the meet-up too. Animal lovers everywhere understood their need to have more furry friends in their lives! 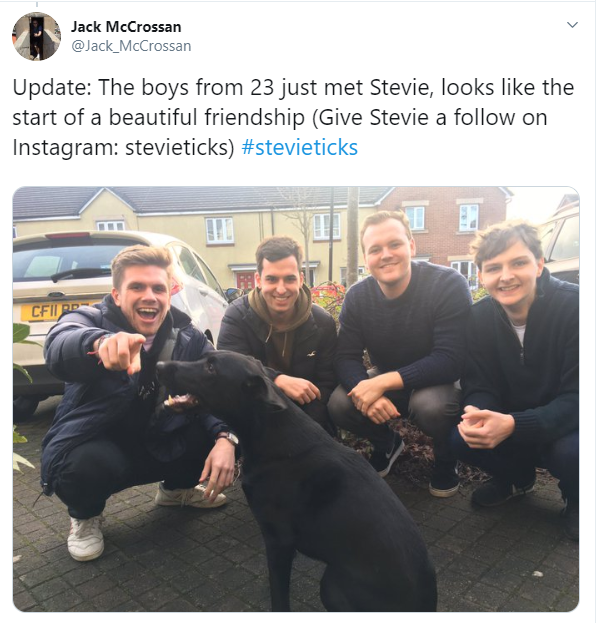 This story couldn’t get any sweeter if they tried! We love that these young men were so eager to meet their canine neighbor, and the fact that Stevie’s owners were so cool about it really warms our hearts. We hope this is the start of a beautiful friendship for all involved.

Share this story to spread that warm & fuzzy feeling with others.