All Tabetha Noel-Ratcliff wanted to do was play in the marching band.

The 15-year-old Northwest High School freshman has practiced the French horn for years and was eager to switch to the mellophone, a similar instrument musicians prefer for marching. But her right hand wasn’t quite up to the task. 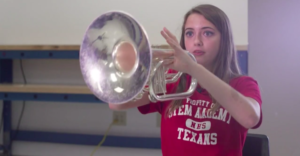 Tabetha was born with symbrachydactyly, which means she has full control over her right arm, but her hand and fingers aren’t completely developed. Among other things, the condition makes managing an instrument while moving extremely difficult. “It’s a little more bumps, up and down,” she said. “Makes it harder to play, and also it’s just harder to balance.”

Her band director noticed her struggle and appealed to the school’s STEM-focused robotics teacher, who knew the perfect student to reach out to. Clark Strong, who had never met Tabetha, has been involved in 3D printing ever since his grandfather introduced him to it years ago. The 16-year-old quickly agreed to take on the project without receiving class credit for it. 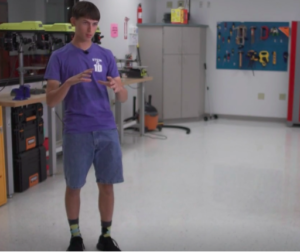 Clark studied the way Tabetha played and designed a prosthetic to help her balance her instrument. He then used the 3D printer he has at home to produce the hard plastic device.

Tabetha now uses the tool whenever she plays, and she’s thrilled that she can finally pursue her passion. “If there weren’t people that did stuff out of the kindness of their heart, I wouldn’t have a prosthetic,” she said. “I wouldn’t be doing as good in band.” 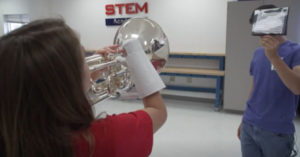 Seeing Tabetha march during football games is also special for Clark. “To know that you’re able to help someone, it’s very rewarding,” he said.

The feeling is even stronger because he can’t watch her without thinking of his grandfather. “He passed away a little over a year ago,” Clark said. “It has been very helpful to be able to sort of carry on his legacy in this 3D printing. A3nd it’s kind of why I keep doing it: to be able to help others, but to also honor him.” 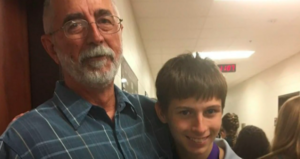 What a moving legacy! All it took was a spark to ignite this smart student’s mind, and then he used his talent to solve a problem. We can help so many by paying attention to the needs of the people around us!