Chad and Keri McCartney were 23 weeks into their pregnancy when they invited the entire family to visit the obstetrician’s office to find out the sex of their new baby. All was going well until the ultrasound tech had a very concerned look. Chad told TODAY how it happened; “All of a sudden the ultrasound tech had a very concerned look on her face,” Chad said. “She rushed our kids out of the room and then informed us there was a large mass on our baby.”

The condition, which affects 1 in 40,000 babies, was considered to be fatal by her doctors. It was a scary situation for any expecting parents to find themselves, but Chad and Keri had hope.

After some research, the McCartney’s obstetrician found  they found Texas Children’s Hospital in nearby Houston,TX was one of three hospitals in the world that specialized in such condition. Surgery needed to happen as soon as possible, but the prognosis revealed a less than 10% chance their child would make it. 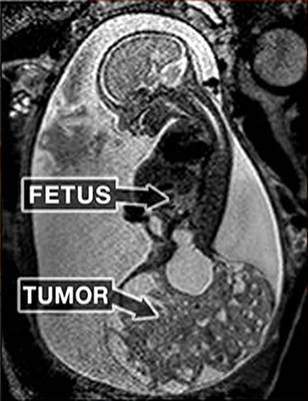 It was right then that Chad and Keri decided they needed to name their unborn child. Chad told TODAY, “We wanted to pick a name that would be appropriate, so we named her Macie Hope — because that was all we felt we had.”

Keri, under deep anesthesia, entered into the 4-hour surgery placing the fate of her baby girl in the hands of her surgeons. The doctors were able to remove the back part of Macie Hope from the uterus and remove the tumor and place her back in the womb. The most critical part of the surgery was making sure the uterus was watertight so amniotic fluid wouldn’t leak.

The doctors were able to safely secure Macie Hope back in her mom’s womb, and 10 weeks later she was born… for the second time! Watch the McCartney family’s powerful story of hope and a medical miracle below!

Share this incredible story with your loved ones today.