Mackenzie Moretter of Shakopee, Minnesota was really sad.  Born with a developmental disorder called Sotos syndrome, she was about to celebrate her 10th birthday…but she was going to do it alone.  All guests invited to her birthday party had recently declined to come.

This was hard enough because Mackenzie only had a few friends in the first place.  Her disorder causes kids like her to grow at a fast rate physically, but often their social and intellectual skills lag behind.  Mackenzie’s dad Matthew said, “Kids are friendly to her, but she doesn’t have friends. No one calls and talks to her. I’ll show up at her school and she will be playing alone.”

Mackenzie’s 10th birthday was about to reflect this sentiment: her playing alone.  At least until Moretter’s mother, Jenny, decided to do something about it.

So, Jenny turned to Facebook and sent out a plea. She expressed that she didn’t want her daughter to be alone and asked a few friends to bring girls to celebrate and stop by, even if just for a quick hello and “Happy Birthday.”

The response was far more than she expected. 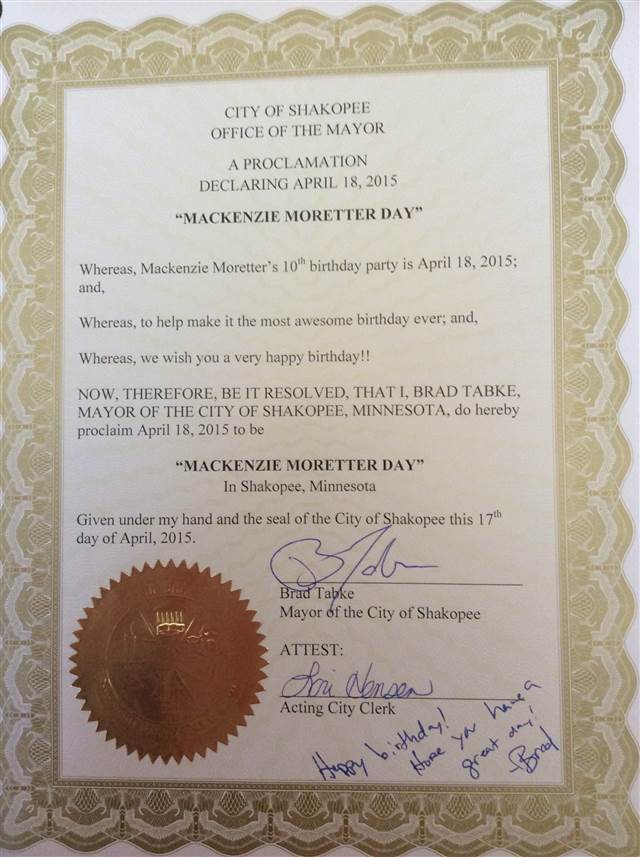 The message spread and people all over–even total strangers–came to celebrate little Mackenzie. All in all, around 500 people showed up to make the little girl feel not alone!

But even more happened.

A GoFund Me page was created to fund the event and its 500 unexpected guests at a park in Shakopee.  The Mayor of the town even declared the day “Mackenzie Moretter Day” in honor of the little girl (see picture above). Volunteers showed up to the park with food and live music. An actress came dressed up as the Disney’s Frozen character Elsa. A pro football player from the Minnesota Vikings stopped by. Bottom line: it turned into an all-out bash and extravaganza!

About the turn-out, Mackenzie said (and this should warm your hearts A LOT), “I have a hard time making friends in school, but thanks to all of you, my voice was heard. I love you all!”

It was a truly special event instigated by a simple message for help.

So here’s our takeaway: If you need something, simply ask.  People are usually far more willing to help than you might think. Mackenzie’s story is the perfect proof!

Please share to spread this incredible message of love and selflessness.