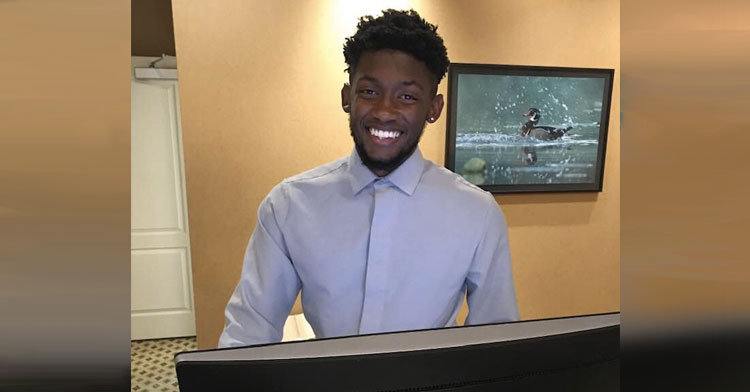 Some employees take the expression “go above and beyond” very seriously.

Satchel Smith is a 21-year-old full time college student who works one evening a week at the Homewood Suites in his hometown of Beaumont, Texas. When he turned up for work at 3 PM one Wednesday afternoon he had no clue that an unusual chain of events was just beginning. By the time he left work he’d be hailed a hero and would be well on his way to viral stardom. 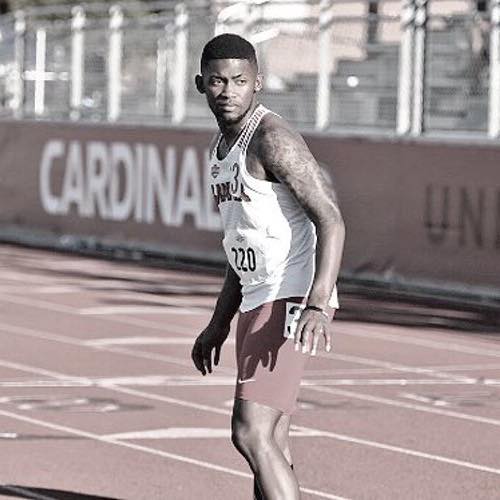 Satchel was scheduled to work until 11 that evening, but as he worked the weather outside continued to deteriorate. Tropical Storm Imelda had been upgrade to a Tropical Depression, bringing torrential flooding that surprised many people along I-10, where the hotel is located.

“I got to work about 3 p.m. Wednesday and it had been raining the whole day, but it wasn’t flooding yet,” he said. When 7 o’clock rolled around he was expecting a coworker to show up and relieve him, but instead he got a text saying she couldn’t make it to work because the roads were flooded. Satchel couldn’t believe what was happening: he was the only employee in the hotel and there was no relief in sight.

Satchel stayed up all night to calm guests, but as the sun rose he began to realize there were some basic human needs to be considered. “Then the morning came around, and I was the only one there and everyone was expecting breakfast,” he explained. 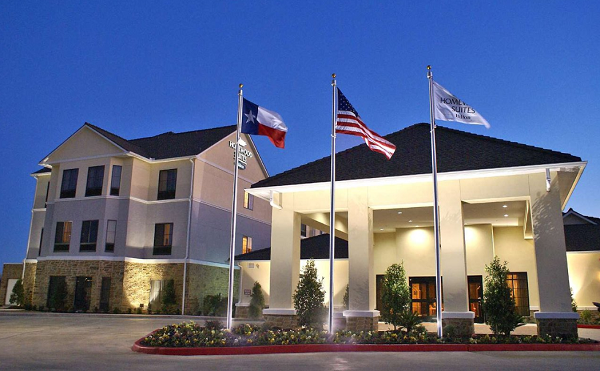 Struggling to stay calm, Satchel set out cereal for the hungry guests, and when one volunteered to help cook a hot breakfast he showed them the kitchen and pitched in there too. Throughout the day Satchel served as every member of staff, from chef to maintenance man to front desk. When Thursday evening rolled around the guests once again ventured into the kitchen, where Satchel helped them prepare a chicken pasta dish and garlic bread for everyone in the hotel.

“I’d never worked in a kitchen,” he admitted. “I’m not really a good cook.” Still, when faced with the possibility of being out in the raging storm the guests were thankful for a safe, warm place and food in their bellies. “Everyone seemed pretty thankful for it,” he said. “They said it was pretty satisfying.”

Satchel also managed to think of those who weren’t even guests at the hotel. “We also invited some people from other hotels to come eat because they didn’t have any food,” he said. As the storm raged on, he and some other guests lined up to bring water to the stranded truckers on the highway. 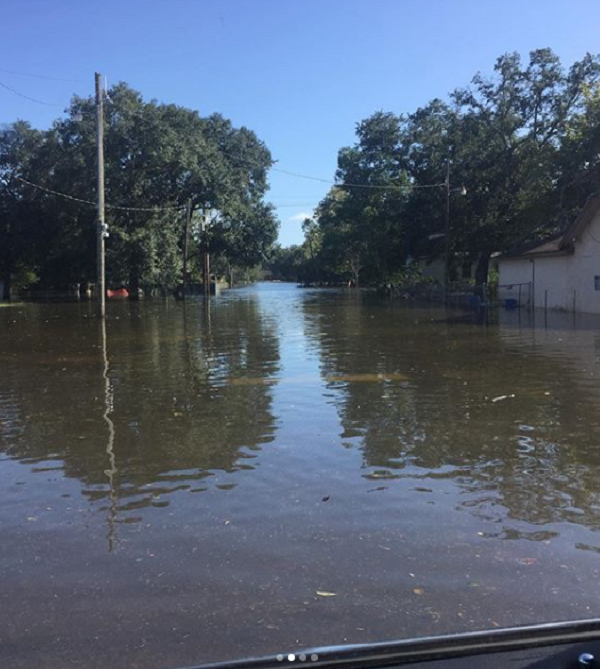 Throughout it all, Satchel kept his cool even though he admits, “It was pretty intense.” In fact, the hotel’s guests were so impressed with the young man’s work ethic and composure that one of them shared his photo on Facebook to praise him. Angela K. Chandler and her family were among the hotel guests who were stuck inside the Homewood Suites, and after she posted about Satchel’s marathon shift the story went viral online.

“The access road is underwater and I-10 is shut down due to flooding. We can’t get in or go out. The hotel a mile from us is under water. Satchel has been here all night. His coworkers couldn’t make it to work so he stayed. He has manned the phones, answered each of our questions, ensured that we have had a hot cup of coffee or tea, and helped serve us a hot breakfast. He has handled this situation with grace, kindness, and a beautiful smile on his face.” 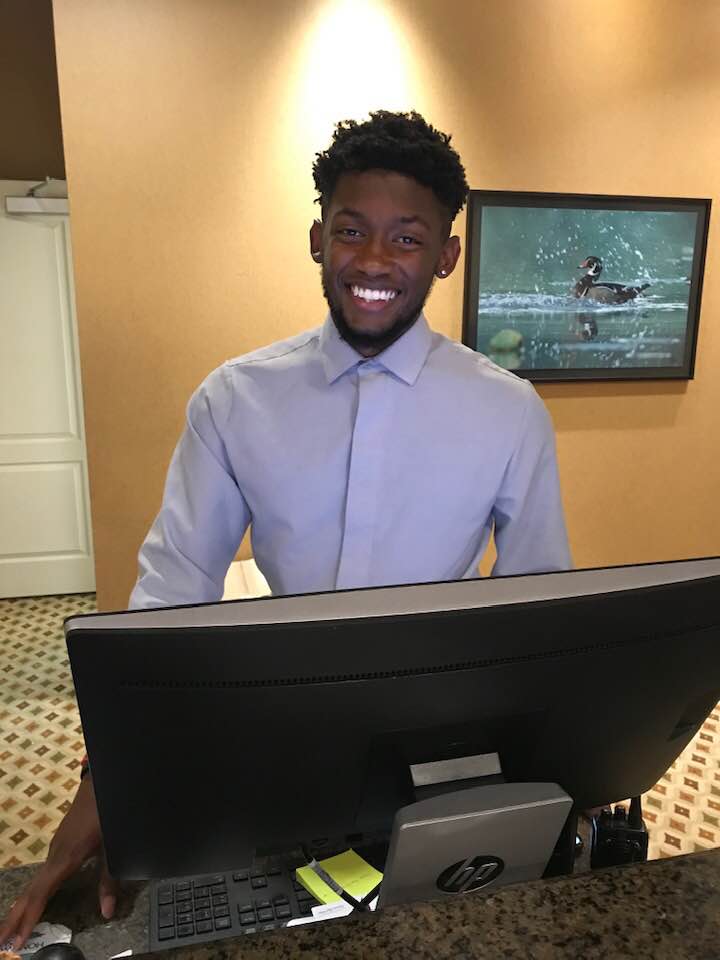 “I have seen a big teddy bear of a man washing dishes and serving eggs, a little grandmother wiping down tables, and a man drenched from head to toe because he crossed I-10 to deliver bottles of water to truck drivers who have been stranded on I-10,” she continued.

“We saw a helicopter land at the hotel adjacent to us where the parking lot is underwater. Someone had to be flown out. I’m looking at my table and see a leftover bagel from breakfast, my hot cup of tea, my cozy socks, and dry tennis shoes. I am thankful for each of these things and for the peace in knowing that my family is safe and sound. Please pray for us and that we can each make it home safely to each of our families.” 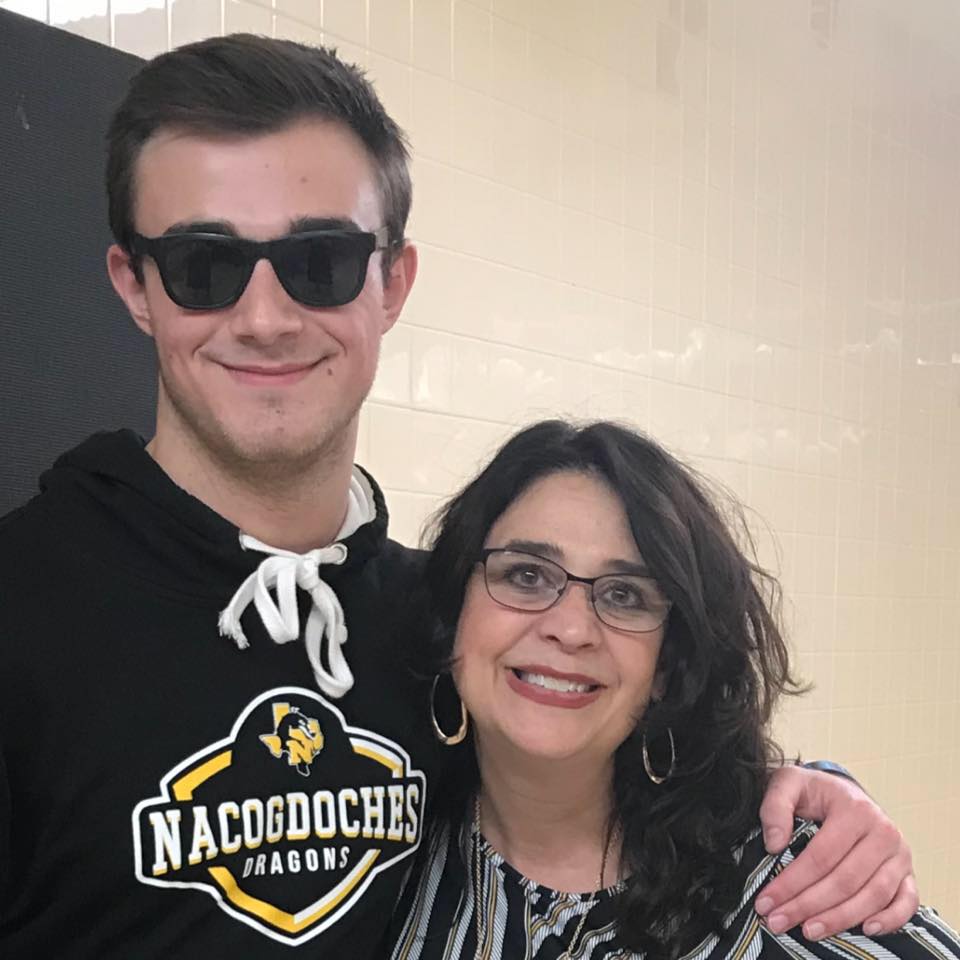 One of Satchel’s coworkers was finally able to make it in on Friday morning, but he didn’t bolt out the door like some employees might. Instead, he stuck around for a few hours to help her out, took a short nap, and then went right back to work until his family could safely come get him.  Rather than focus on the negatives, Satchel thinks he was meant to be there to help the guests during the storm. “Everything happens for a reason,” he said. “I was always gonna be there for them, I would never plan on leaving. I don’t consider myself a hero, that’s just what I would do, I think anybody would do the same thing.”

Yet for Angela and the other hotel guests, Satchel is undeniably a hero. Not only that, but his employer now has guests who are loyal for life thanks to their incredible staff member. “If you know Satchel, tell him he is our hero!” Angela wrote. “I will stay here next time just knowing that despite whatever happens, I will have someone putting our needs above his own needs.” 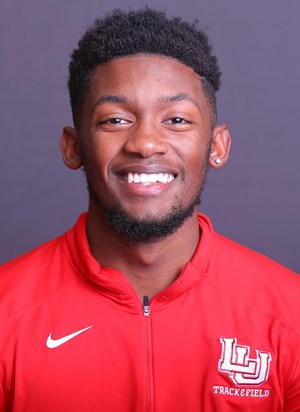 Not only did Satchel work for 32 hours straight to help the guests at his hotel, but he did it all with a smile on his face! This is the sort of work ethic we could use more of in the world. We’re so glad he’s receiving the recognition he deserves.

Share this story to thank Satchel for his help during the storm.