Now, more than ever, young girls are learning how important it is to speak up for themselves.

One nine-year-old just celebrated International Women’s Day with the amazing reward that came from raising her own voice. Riley Morrison loves playing basketball and is a big fan of NBA star Stephen Curry. As such, she asked her dad, Chris, if she could get the Golden State Warriors player’s signature shoes to kick off her own team’s upcoming season. 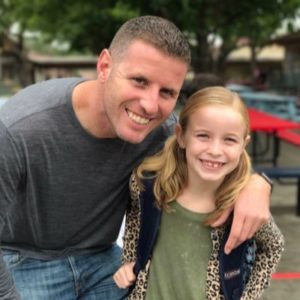 Unfortunately, they couldn’t find the Curry 5 sneakers in girl sizes on the Under Armour website. So in November, Riley wrote Curry a letter suggesting he do something about it. Chris shared her message on Twitter, hoping to catch Curry’s attention. 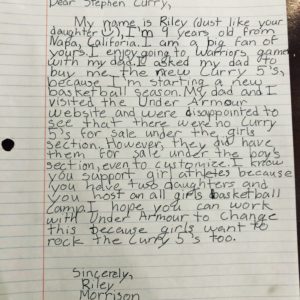 “My name is Riley (just like your daughter), I’m 9 years old from Napa, California I am a big fan of yours. I enjoy going to Warriors games with my dad,” the little girl wrote, explaining she really wanted a pair of his sneakers.

“My dad and I visited the Under Armour website and were disappointed to see that there were no Curry 5’s for sale under the girls section. However, they did have them for sale under the boy’s section, even to customize. I know you support girl athletes because you have two daughters and you host an all girls basketball camp. I hope you can work with Under Armour to change this because girls want to rock the Curry 5’s too.”

Curry definitely took notice and responded a little over a week later, writing, “Appreciate you helping us get better Riley! We got you.” Not only did he promise to update the website’s listings, but he sent her a free pair of Curry 5’s and said she’d “be one of the first kids get the Curry 6.” 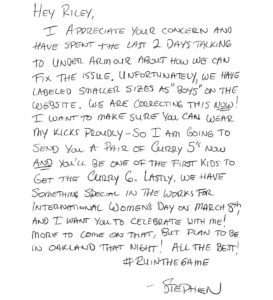 He also let her know he had something special planned for International Women’s Day and that she’d be a part of it. 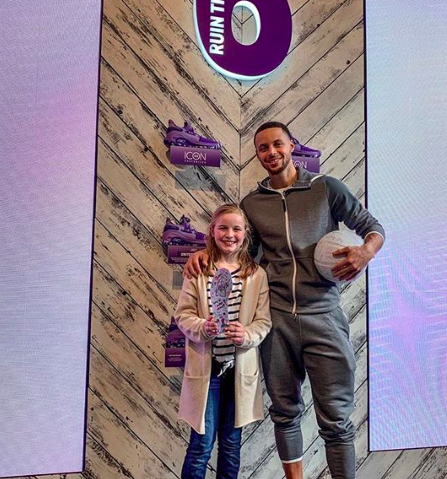 Fast forward to March 8, when Under Armour unveiled a special sneaker…co-designed by Riley herself! The company wrote that the “United We Win” sneaker “pays homage to Riley Morrison and ALL women around the world who are using their voice to fight for equality.” 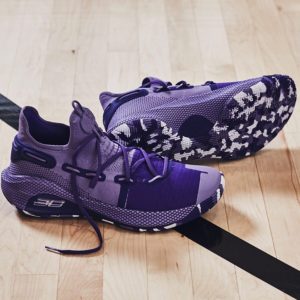 The purple shoes feature Riley’s drawing of two girls holding a basketball on a sock liner surrounded by positive messages including “Rock the Currys,” “Girl Power,” and “Be Bold.” 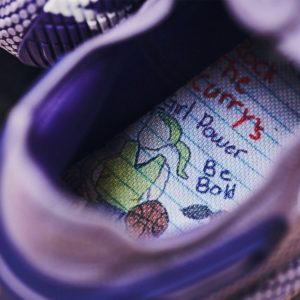 Under Armour also released a sweet video of Riley and Chris meeting with Curry that day to celebrate their creation.

Look at what the power of a voice can create. 9-year old Riley Morrison wrote a letter to @stephencurry30 to let him know she could not find his signature shoe in girl sizes. 5 months later, she co-designed the #UAIcon “United We Win” #Curry6 for International Women’s Day. That’s how you #RuinTheGame. ? @uabasketball’s IG story for the full interaction. #WEWILL

But perhaps the best thing to come out of all of this is that sales from the sneaker will go toward a college scholarship for a young woman in the Bay Area every year. The recipient this year was Vivian Wu, who received $30,000 to pursue her STEM education. 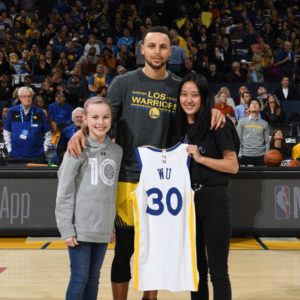 By making herself heard, Riley has made an incredible impact not just for herself, but countless other young women. You’re an inspiration, Riley. Keep raising that voice!

Share this empowering story with all the women in your life.