Losing a loved one is like losing a part of your future. There are no more conversations, hugs, or meaningful moments to share with that special person. Only the memories remain.

That isn’t to say we can’t keep our connections alive, even if the other person is gone. Rax King, a writer from Brooklyn, New York, lost her dad but still writes to him whenever she needs comfort or advice. 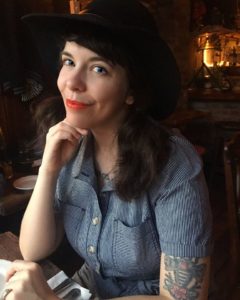 Rax has been emailing her father’s old work account for a while now. Sometimes it’s just to tell him she misses him, or to ask for what she calls “ghost advice.” Of course, she never expected a response. She didn’t even think anyone would notice her messages. That was before somebody sent a reply.

In December, Rax came across a touching message in her inbox. It was about her father. As she read the two enclosed paragraphs, she sobbed. The sender wasn’t her dad, but someone who cared for him dearly — an old coworker who’d seen her emails coming in.

“I want you to know that he loved you more than anything,” they wrote. “It was so special that you were able to have such a close relationship. Not everybody has that with their dad.” 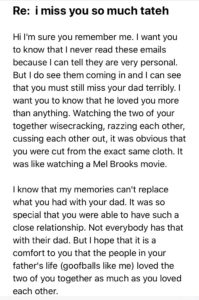 Rax shared the email on Twitter, where it went viral. The kind words struck a chord with others who could relate. Many supportive comments came from people who send messages to their own late fathers from time to time. One came from a dad who hopes his daughter will find solace in doing the same when he passes on. 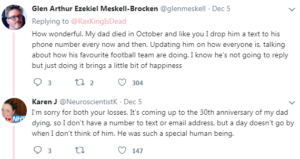 Love never dies as long as we keep expressing it. We know if Rax’s father could, he’d tell her he misses her just as much. Clearly, the two share an unbreakable bond that transcends life and death.

Share this beautiful story with anyone who you think needs it today.